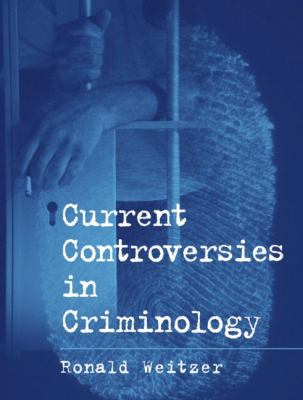 Current Controversies in Criminologyoffers readings on the causes of crime and on several important contested issues in American criminal justice. All of the articles are solid, scholarly examinations of key problems and issues in the field of criminology. The book covers: Theories regarding thecausesof crime; Crimesthat are especially controversial or relatively new, poorly understood, and under-researched (hate crime, computer crime); Crime-fighting methodsthat have either a long and controversial history or new, cutting-edge measures that are equally controversial. These readings are intended to stimulate critical thinking, dispel common myths about crime and crime-control practices, and generate informed class discussions about some of the most important issues in criminology today. The book is divided into three parts. Part I, "What Causes Crime?" examines differing explanations of criminal behavior. Major perspectives are represented, including subcultural theory, conflict theory, routine activities theory, social disorganization theory, symbolic interactionist theory, and control theory. Some of these theories are presented as general explanations of crime, purportedly explaining all types of crime and thus competing with other theories, while other perspectives are less grandiose, being designed to explain certain types of crime or why crime occurs under certain kinds of conditions. Part II, "Controversial Crimes," investigates several controversial or "new" types of crime that have generated heated debate in American society. Included are victimless crime, hate crime, child abuse, school shootings, date rape, computer crime, corporate crime, and government-sponsored crime. The featured articles examine offenders' motivations, harms to victims and to society, the criminal justice system's response, and some policy implications. Each article uses social science evidence to challenge popular misconceptions about these crimes. Part III, "Controversial Crime-Fighting Methods," covers some of the most disputed crime-fighting techniques in America. Each reading critically evaluates one of these methods, raising questions about whether it does more harm than good. Included are measures that have a long history of controversy--such as gun control, the death penalty, and drug control--as well as some that have only recently begun to generate public concern and debate-such as "three-strikes and you're out" laws, racial profiling by the police, the crackdown on juvenile crime, community notification about sex offenders, and DNA testing.Weitzer, Ronald is the author of 'Current Controversies in Criminology', published 2002 under ISBN 9780130941152 and ISBN 0130941158.