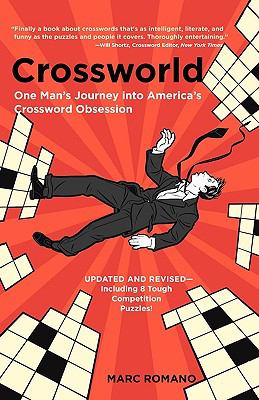 Chapter 1 My Puzzling Problem I am hopelessly addicted to the New York Times crossword puzzle. Like many addicts, it's taken me time to admit I have a problem. The hints I was heading for trouble came, at first, only occasionally. The moments of panic when I realized that for whatever reason I might not be able to get my fix on a given day. The toll on relationships. The strained friendships. The lost hours I could have used to do something much more productive. It gets worse, too. The high no longer lasts as long as it once did; what initially could occupy me for a whole afternoon now takes me twenty minutes or less to get through. I have become increasingly alarmed that the supply of the thing I need is limited. The Times publishes only one puzzle per day, and when that's done I find myself rooting about for substitutes--the Wall Street Journal, Philadelphia Inquirer, and New York Sun puzzles, to name just a few--that are somehow less satisfying. Sure, there are a couple of thousand puzzles in the Times's electronic archive. But a puzzle you've already done being something of a dead letter, falling back to that recourse is something like accepting an herbal cigarette when you're a smoker plumb out of Camels. There is no substitute for the genuine article, and a sort of panic sets in once it's no longer available. To badly paraphrase the British novelist C. S. Forester, it is prospect and not possession that affords the greatest pleasure, and the delicious agony of the twenty-four hours between completing one puzzle and starting another makes up the circadian rhythm by which my life has been regulated for nigh on two decades now. If you've ever been to or listened in on a meeting of any of the twelve-step groups--Alcoholics Anonymous, Narcotics Anonymous, Overeaters Anonymous--you may have noticed the pattern that emerges from the narratives of the people who get up to publicly confess their addictions. These men and women all seem to be describing, in their own ways, how they were caught blindside by their particular object of desire. At an AA meeting, it may be the woman whose parents owned a tavern; all those surreptitious sips of liquids from colorful bottles as a little girl transmuted, for her, into a spiral of inebriation and promiscuity that ended only six months before in this very room. At an NA meeting, it may be the regional salesman whose toots of cocaine on the road, originally just to help clear his head, paved the way for divorce, petty theft, and finally grand larceny and imprisonment. What these stories say, in essence, is that all addicts go through a lapsarian event of some sort or another, which may be why so many twelve-step meetings take place in churches: It's comforting to explain one's own fall from grace in an environment where the fact of being out of grace is dwelt upon so constantly. Addicts seem to fetishize the fact of their own fall, even though the process of falling is, in the end, rather the same whether you happen to be the reformed floozy, the now reemployed and sober salesman, or Adam and Eve. Only the substance changes: alcohol, cocaine, knowledge of good and evil. Or crosswords. My own fall was right down the pipe, in addiction-narrative terms. Along with a few friends from my hometown at the northernmost end of Boston's North Shore (white-clapboard public buildings, preppies, gulls wheeling in the deep, snug, boat-filled harbor), I was invited down to New Canaan, Connecticut, for a house party hosted by a friend of ours whose parents had, the year before, moved from the Bay State to the Nutmeg State. This was late summer 1985; I was between my sophomore and junior years in college. The six of us drove down in two cars at far too great a speed, with me at the helm of a Ford F250 pickup whose nervous owner sat beside me, constantly doling out advice about the way I was handling his beloved truck.