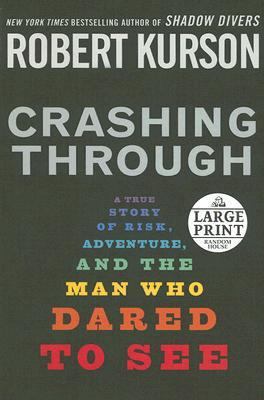 Chapter One Mike May's life was near perfect when, on February 11, 1999, he made his way to the dais in the ballroom of San Francisco's St. Francis Hotel. The forty-six-year-old businessman had been invited to present the prestigious Kay Gallagher Award for mentoring the blind, an award he'd won himself the previous year. Dozens in the audience knew his history: blinded at age three by a freak accident; three-time Paralympics gold medalist and current world record holder in downhill speed skiing; entrepreneur on the verge of bringing a portable global positioning system (GPS) to the blind; coinventor of the world's first laser turntable; mud hut dweller in Ghana; husband to a beautiful blond wife (in attendance and dressed in a tight black top, short black skirt, and black high heels); loving father; former CIA man. People watched the way May moved. He walked with a quiet dignity, effortlessly negotiating the obstacle course of banquet tables and chairs, smiling at those he passed, shaking hands along the way. There was more than mobility in his step; his gait seemed free of regret, his body language devoid of longing. Most of the people in this room worked with the blind every day, so they knew what it looked like for a person to yearn for vision. May looked like he was exactly who he wanted to be. He was accustomed to public speaking, and his messages were always inspiring. But every so often a member of the audience would turn on him, and it usually came at the same part of his talk, the part when he said, "Life with vision is great. But life without vision is great, too." At that point someone would stand and jab his finger and say, "That's impossible!" or "You're not dealing with your inner demons," or "You're in denial." The objections came from both the blind and the sighted. May was always polite, always let the person finish his thought. Then, in the warm but definite way in which he'd spoken since childhood, he would say, "I don't mean to speak for anyone else. But for me, life is great." That, however, would not be the message for this evening. Instead, the tall and handsome May spoke glowingly about the award winner, about how much it had meant to him to win the Gallagher, and about the importance of mentoring. He seasoned his talk with jokes, some tried and true, others off the cuff, all to good effect. Then he presented the honoree with a plaque and a check and returned to his seat. When he sat down, his wife, Jennifer, told him, "You made me cry. You look beautiful in that suit. That was a lovely talk." May and Jennifer stayed at the hotel that night. Ordinarily, they would have awoken and made the seventy-five-mile drive to their home in Davis, California, each needing to return to work. But Jennifer's contact lenses had been bothering her, so she had scheduled an appointment with a San Francisco optometristnot her regular eye doctor, but a college friend's husband who had been willing to see her on short notice. Though May was itching to get back to his home office, he agreed to accompany Jennifer to the appointment. The morning was glorious as the couple strolled San Francisco and enjoyed that rarest of pleasures, an unhurried weekday breakfast at a streetside cafe. The optometrist's office was nearby, so May and Jennifer, along with May's Seeing Eye dog, a golden retriever named Josh, walked up Post Street to make it to the morning appointment. Jennifer assured him that the visit would take no more than thirty minutes. May had never accompanied his wife to an eye aKurson, Robert is the author of 'Crashing Through The Story of a Blind Man Who Dared to See', published 2007 under ISBN 9780739327227 and ISBN 0739327224.