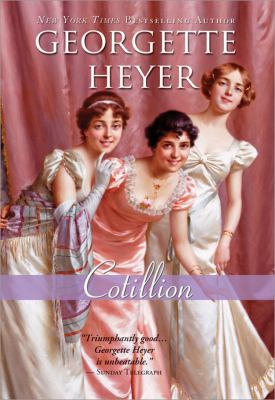 Excerpt from Chapter 1 The Saloon, like every other room in Arnside House, was large and lofty, and had been furnished, possibly some twenty years earlier, in what had then been the first style of elegance. This, however, had become outmoded, and although the room bore no such signs of penury as a ragged carpet or patched curtains, the bright brocades had faded, the paint on the panelled walls had cracked, and the gilded picture-frames had long since become tarnished. To a casual visitor it might have seemed that Mr Penicuik, who owned the house, had fallen upon evil days; but two of the three gentlemen assembled in the Saloon at half-past six on a wintry evening of late February were in no danger of falling into this error. They knew that Great-uncle Matthew, who had made a fortune in the large enterprise of draining the Fen-country, was one of the warmest men in England, and suffered merely from a rooted dislike of spending money on anything that did not administer directly to his own comfort. The third gentleman gave no indication of thinking about it at all. He did not, like his cousin, Lord Biddenden, level a disapproving eyeglass at a spotted mirror; he did not, like his younger cousin, the Honourable and Reverend Hugh Rattray, comment acidly on the inadequacy of the small wood-fire burning in the hearth. Throughout dinner, which had been served at the unfashionable hour of five, and had been chosen (as Lord Biddenden pointed out to his brother) more with a regard to the host's digestive difficulties than to the tastes of his guests, he had maintained a silence that might have been unbroken had his cousin Hugh not addressed a series of kind and simple remarks to him, which could be easily understood, and almost as easily answered. Upon entering the Saloon, he had drifted to a chair on one side of the fireplace, where he now sat, chewing a corner of his handkerchief, and staring with an expression of vacuity at his elder cousin. Lord Biddenden knew that this gaze betokened nothing but blankness of mind, but he found it disconcerting, and muttered fretfully: 'I wish the silly fellow would not stare so!' 'He is doing you no harm,' his brother said gravely. However, he picked up a book of engravings from one of the tables, and gave it to Lord Dolphinton, directing him to look at the pictures, and telling him that he would find them very pretty and interesting. Lord Dolphinton, who was accustomed to being told, far less kindly, by his mother, what he must do, received the book gratefully, and began to turn over the pages. Lord Biddenden said, still in that complaining under-voice: 'I cannot conceive what should have prevailed with Uncle Matthew to have invited him! It is absurd to suppose that he can have an interest in this business!' He received no other answer than one of his brother's annoyingly reproving looks, and with an exclamation of impatience walked over to the table, and began to toss over one or two periodicals which had been arranged upon it. 'It is excessively provoking that Claud should not be here!' he said, for perhaps the seventh time that day. 'I should have been very glad to have seen him comfortably established!' This observation being met with the same unencouraging silence, his lordship said with a good deal of asperity: 'You may not consider Claud's claims, but I am not one to be forgetting my brothers, I am thankful to state! I'll tell you what it is, Hugh: you are a cold-hearted fellow, and if you depend upon your countenance to win you a handsome fortune, you may well be disappointed, and there will all my trouble be spent for nothing!' 'What trouble?' enquired the Rector, in accents which lent some colour to his brother's accusation. 'If it had not been for my representations of what you owe to the family, you would not be here this evHeyer, Georgette is the author of 'Cotillion ', published 2007 under ISBN 9781402210082 and ISBN 1402210086.