Cool Woods A Trip Around the Worlds Boreal Forest 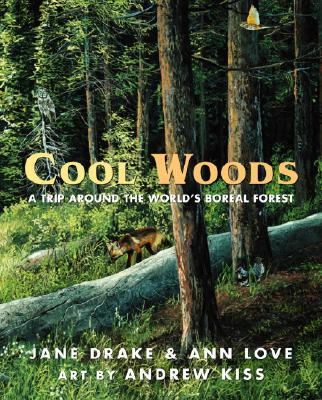 FOREVER GREEN Step into the woods. The wet ground springy with moss soaks your shoe. The soft-green needles of the spruce tree tickle the palm of your hand. Above, a chocolate shadow presses against the trunk. One wink reveals a boreal owl, daydreaming of voles and chickadees. Speckled summer sunlight catches a mound of dog-tongued lichen but misses a nearby wood frog. Shut your eyes and breathe deeply. A wild mix of skunk, damp mushrooms, and fragrant fir tingles your nose. Brush the mosquito from your ear and listen to the woodpecker's staccato beat. These are the cool, northern woods that encircle the world. To return the hug, we are learning to care for them, the largest forest left on Earth. *** WOLF CALL Around the world, people hear the haunting howls of a wolf pack and think of the wild northern forest. From prehistoric times, wolf lore has crept into people's imaginations. Some fear wolves; others shoot them. But many understand and admire these intelligent carnivores. Crying Wolf? Wolves don't cry, they howl to define territory, gather family, and warn intruders. Thrown to the Wolves? Wolves are villains in stories. But you're more likely to be struck by an asteroid than eaten by a wolf. Healthy wolves avoid people. Wolf Down Food? Sharp teeth and strong jaws make powerful eating machines. A wolf meal is meat, and lots of it up to 9 kg (20 pounds), about 80 hamburgers worth, at a time. *** WINTER IN THE WOODS A still, bitter cold settles on the forest this January afternoon. The spruce trees stand rigid, resisting the occasional gust of wind. From its snow-covered branch, a red squirrel scolds a pine grosbeak as the bird snaps up the last frozen blueberry on a nearby bush. The temperature is well below zero and falling In the north woods, temperatures stay below freezing for more than half the year. And the ground is often snow-covered from October until May. With everything frozen for so long, winter is also dry. Yet resident birds and animals survive the meanest of winters, as do the trees that shelter them. Northern trees actually prefer long, dry winters. Coniferous spruce, fir, pine, and larch have adapted to the harsh climate in special ways: Conical shape: Heavy snow slides off conifers rather than weighing down and breaking branches. Needles: Trees lose less water through thin, waxy needles than through leaves. Evergreen: Most conifers don't waste energy growing needles each year. And by staying dark green year round, the needles absorb some heat from the winter sun. Shallow roots: The farther north you go, the longer the ground stays frozen in spring. In the farthest north, only the top layer thaws above permanently frozen ground, or permafrost. Northern trees have shallow roots that spread sideways to draw up water as soon as the ground surface melts. Deciduous Survivors Northern birch, alder, and young aspen are adapted to survive winter too. Their branches will bend in half before snapping under heavy snow. *** FIRE! FIRE! Springtime is fire time. The sun shines more than twelve hours a day. Dried by winter's wind, pine needles ignite quickly. Fire wipes the woods clean by devouring undergrowth and debris; healthy, sick, and weak trees; wildlife and insects. Native trees can take the heat they're adapted to regrow after fire. Intense flames release seeds from hardy pinecones while ash enriches the soil and protects germinating seeds. As the smoke clears, in move the wood-eating beetles. Beetle-eating woodpeckers quickly follow. Fireweed, berries, and grasses sprout from the ashes, and moose nibble their tender shoots. Aspen and birch send up new saplings from oDrake, Jane is the author of 'Cool Woods A Trip Around the Worlds Boreal Forest' with ISBN 9780887766084 and ISBN 0887766080.

3 from $1.98
Loading marketplace prices 3 copies from $1.98 How does the rental process work?
View more