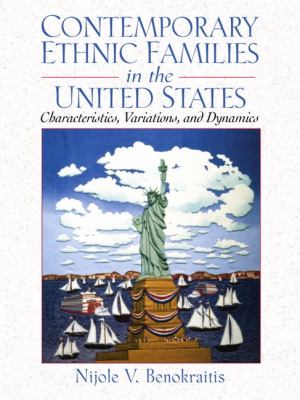 Preface The proportion of ethnic minority families in the United States is growing at a breathtaking pace. By 2025, according to Census Bureau projections, 62 percent of the U.S. population will be white, down from 76 percent in 1990 and 86 percent in 1950 (see Reading 1). The increasing cultural, racial, and ethnic diversity of U.S. families is generating much interest among scholars, journalists, politicians, and students. During the mid-1980s, "Racial and Ethnic Relations" courses often were canceled because of low enrollments, but a decade later, classes were overflowing. During end-of-semester course evaluations, moreover, a number of students offered (unsolicited) comments like "I never realized I stereotyped until I took this course" or "This course should be required forallUniversity of Baltimore students because we don't know very much about our classmates and coworkers." Such remarks were gratifying, of course, but despite many students' enthusiastic reactions, I felt frustrated when choosing textbooks--for several reasons. First, although there are several excellent race and ethnic textbooks on the market, they typically offer scope rather than depth because it's nearly impossible to provide both. Second, when I searched for edited volumes that would provide the depth I wanted, I discovered several shortcomings. The books typically devoted much space to European American families, but I wanted more coverage of ethnic minority families. The books tended to focus on low-socioeconomic households--especially those in black and Latino communities--but I was interested in increasing students' awareness of healthful family processes across and within ethnic households, whether poor, middle-class, or affluent. And all of the anthologies failed to recognize what I call the "heterogeneity of diversity" of U.S. families. For example, in 1990 Chinese, Filipinos, and Japanese ranked as the largest Asian American groups, but Southeast Asians, Indians, Koreans, and Pakistanis have been registering much faster growth. Mexicans, Puerto Ricans, and Cubans have been the dominant groups among Latinos, but their growth rate, too, is being outpaced by immigration from Central and South American countries such as El Salvador, Guatemala, and Brazil. Similarly, we rarely read or hear about the influx of Middle Eastern or Caribbean families. Ignoring many of the relatively small ethnic groups gives a skewed picture of diversity and increases the invisibility of significant numbers of U.S. households. Third, many of the edited volumes focus on demographic characteristics, migration patterns, and the history of the immigrants' country of origin. I wanted students to learn more aboutfamiliesandfamily processes--how ethnic families interact on a daily basis, cope with difficulties, and adjust to a new environment. Selections that emphasize historical backgrounds do not capture recent intergenerational changes. Fourth, I found that many of the anthologies contained articles based on 1970s and 1980s data. Although there is nothing wrong with using older selections when necessary, ethnic families changed considerably--demographically and culturally--during the 1990s. Purpose of the Book Contemporary Ethnic Families in the United Stateswill broaden students' awareness of the increasing heterogeneity of diversity in U.S. society. This anthology provides representative articles about African Americans; families with Latino roots (including Mexican Americans, Central Americans, and Latin Americans); Caribbean families; families from East Asia, South Asia, and Southeast Asia; and families from the Mideast. I would have liked to include selections about many of the subgroups within each major ethnic group (such as Laotian Americans for Southeast Asian families) and for each of the topics I cover. But substantive articles areBenokraitis, Nijole V. is the author of 'Contemporary Ethnic Families in the United States Characteristics, Variations, and Dynamics', published 2001 under ISBN 9780130893260 and ISBN 0130893269.