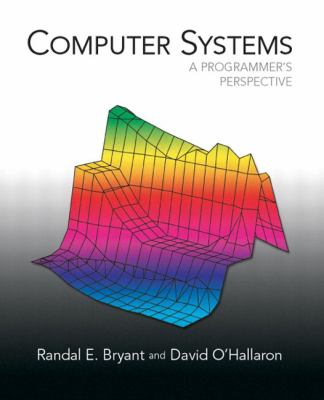 This book,Computer Systems: A Programmer's Perspective(CS:APP), is for programmers who want to improve their skills by learning what is going on "under the hood" of a computer system. Our aim is to explain the enduring concepts underlying all computer systems, and to show you the concrete ways that these ideas affect the correctness, performance, and utility of your application programs. Unlike other systems books, which are written primarily for system builders, this book is written for programmers, from a programmer's perspective. If you study and learn the concepts in this book, you will be on your way to becoming the rare "power programmer" who knows how things work and how to fix them when they break. You will also be prepared to study specific systems topics such as compilers, computer architecture, operating systems, embedded systems, and networking. Assumptions About the Reader's Background The examples in the book are based on Intel-compatible processors (called "IA32" by Intel and "x86" colloquially) running C programs on Unix or Unix-like (such as Linux) operating systems. (To simplify our presentation, we will use the term "Unix" as an umbrella term for systems like Solaris and Linux.) The text contains numerous programming examples that have been compiled and run on Linux systems. We assume that you have access to such a machine, and are able to log in and do simple things such as changing directories. If your computer runs Microsoft Windows, you have two choices. First, you can get a copy of Linux (seewww.linux.orgorwww.redhat.com) and install it as a "dual boot" option, so that your machine can run either operating system. Alternatively, by installing a copy of the Cygwin tools (www.cygwin.com), you can have up a Unix-like shell under Windows and have an environment very close to that provided by Linux. Not all features of Linux are available under Cygwin, however. We also assume that you have some familiarity with C or C++. If your only prior experience is with Java, the transition will require more effort on your part, but we will help you. Java and C share similar syntax and control statements. However, there are aspects of C, particularly pointers, explicit dynamic memory allocation, and formatted I/O, that do not exist in Java. Fortunately, C is a small language, and it is clearly and beautifully described in the classic "K&R" text by Brian Kernighan and Dennis Ritchie 40. Regardless of your programming background, consider K&R an essential part of your personal systems library. Several of the early chapters in the book explore the interactions between C programs and their machine-language counterparts. The machine language examples were all generated by the GNU Gcc compiler running on an Intel IA32 processor. We do not assume any prior experience with hardware, machine language, or assembly-language programming. How to Read the Book Learning how computer systems work from a programmer's perspective is great fun, mainly because it can be done so actively. Whenever you learn some new thing, you can try it out right away and see the result first hand. In fact, we believe that the only way to learn systems is todosystems, either working concrete problems, or writing and running programs on real systems. This theme pervades the entire book. When a new concept is introduced, it is followed in the text by one or morepractice problemsthat you should work immediately to test your understanding. Solutions to the practice problems are at the end of each chapter (look for the blue edge). As you read, try to solve each problem on your own, and then check the solution to make sure you are on the right track. Each chapter is followed by a set of homework problems of varying difficulty. Your instructor has the solutions to thehomework problemsin an instructor's manual. For each homework problem, we show a raDavid R. O'Hallaron is the author of 'Computer Systems: A Programmer's Perspective', published 2002 under ISBN 9780130340740 and ISBN 013034074X.