Complicity How The North Promoted, Prolonged, and Profited From Slavery 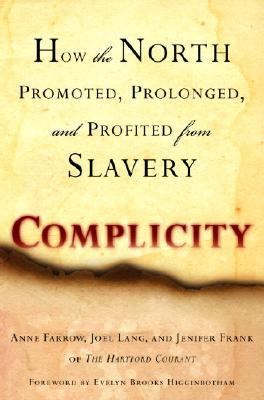 Chapter One COTTON COMES NORTH "The ships would rot at her docks; grass would grow in Wall Street and Broadway, and the glory of New York, like that of Babylon and Rome, would be numbered with the things of the past." The answer given by a prominent Southern editor when asked by The Times (London), "What would New York be without slavery?" Fernando Wood thought his timing was perfect. The election of an antislavery president had finally forced the South to make good on years of threats, and the exodus of 11 states from the Union had begun. Militant South Carolina was the first to secede, after a convention in Charleston five days before Christmas of 1860. Within weeks, 6 more states had broken off from the Union, and by the end of May, the Confederacy was complete. As the most profound crisis in our young nation's history unrolled, Wood, the mayor of New York, America's most powerful city, made a stunning proposal: New York City should secede from the United States, too. "With our aggrieved brethren of the Slave States, we have friendly relations and a common sympathy," Wood told the New York Common Council in his State of the City message on January 7, 1861. "As a free city," he said, New York "would have the whole and united support of the Southern States, as well as all other States to whose interests and rights under the constitution she has always been true." Although many in the city's intelligentsia rolled their eyes, and the mayor was slammed in much of the New York press, Wood's proposal made a certain kind of sense. The mayor was reacting to tensions with Albany, but there was far more behind his secession proposal, particularly if one understood that the lifeblood of New York City's economy was cotton, the product most closely identified with the South and its defining system of labor: the slavery of millions of people of African descent. Slave-grown cotton is, in large part, the root of New York's wealth. Forty years before Fernando Wood suggested that New York join hands with the South and leave the Union, cotton had already become the nation's number one exported product. And in the four intervening decades New York had become a commercial and financial behemoth dwarfing any other U.S. city and most others in the world. Cotton was more than just a profitable crop. It was the national currency, the product most responsible for America's explosive growth in the decades before the Civil War. As much as it is linked to the barbaric system of slave labor that raised it, cotton created New York. By the eve of the war, hundreds of businesses in New York, and countless more throughout the North, were connected to, and dependent upon, cotton. As New York became the fulcrum of the U.S. cotton trade, merchants, shippers, auctioneers, bankers, brokers, insurers, and thousands of others were drawn to the burgeoning urban center. They packed lower Manhattan, turning it into the nation's emporium, in which products from all over the world were traded. In those prewar decades, hundreds of shrewd merchants and smart businessmen made their fortunes in ventures directly or indirectly tied to cotton. The names of some of them reverberate today. Three brothers named Lehman were cotton brokers in Montgomery, Alabama, before they moved to New York and helped to establish the New York Cotton Exchange. Today, of course, Lehman Brothers is the international investment firm. Junius Morgan, father of J. Pierpont Morgan, arranged for his son to study the cotton trade in the South as the future industrialist and banker was beginning his business career. Morgan Sr., a MasFarrow, Anne is the author of 'Complicity How The North Promoted, Prolonged, and Profited From Slavery', published 2005 under ISBN 9780345467829 and ISBN 0345467825.