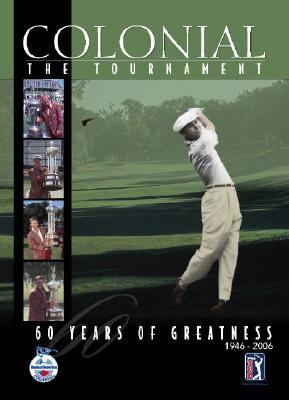 Thousands of people have contributed to bringing the Colonial story to life over the last 60 years. Members, volunteers, fans, sponsors, golfers - they all deserve a tremendous amount of credit. To tell their stories, a team of writers contributed to this celebration of Colonial's 60th anniversary tournament. All have a long relationship with the event, and keen insight into its history. Dan Jenkins is one of America's most acclaimed sportswriters - and a best-selling novelist as well. He attained a national reputation over 25 years with Sports Illustrated, and still writes for Golf Digest. Three of his 10 novels, Semi-Tough, Dead Solid Perfect and Baja Oklahoma, have been made into movies. He has covered more major championships for newspapers and magazines than anyone who has ever written about the sport. Jenkins has been inducted into the National Sportswriters Hall of Fame, the Texas Sports Hall of Fame, the Texas Golf Hall of Fame and the TCU Lettermen's Hall of Fame. In 2005 he received the William D. Richardson Award form the Golf Writers Association of America for lifetime contributions to golf. Jenkins contributed to this project the chapter about Colonial's golf course in the early years. In 1986 Freelance writer Russ Pate authored The Legacy Continues, a 50-year history of Colonial Country Club. His subsequent nine books include collaborations with Doug Sanders, Mike Singletary, Bob Watson, Cynthia Cooper and Rich "Goose" Gossage. Pate also teamed with Azle native and former Senior PGA Tour player Robert Landers on Greener Pastures: An Incredible Journey From the Farm to the Fairways. A co-founder of the Texas Golf Writers Association whose byline appears in national and regional consumer magazines, Pate for years has contributed player profiles and feature articles to the Colonial and Byron Nelson tournament programs. For this project he wrote two chapters: one on Marvin and Marty Leonard ("Remembering Marvin") and one on the priceless contributions of tournament volunteers. Also, much of the opening chapter and some information from the 1941 U.S. Open chapter, first appeared in The Legacy Continues. Mike Rabun recently retired from United Press International after more than 40 years of covering and editing news and sports events. Prior to becoming UPI's Southwest Sports Editor in 1972, he took part in the wire service's coverage of the assassination of President Kennedy, became an eyewitness to the murder of Lee Harvey Oswald and covered the first manned landing on the moon. He went on to cover 10 Olympics, 15 Super Bowls, six Final Fours, about 40 major golf championships, scores of PGA Tour events and hundreds of regular-season professional and collegiate football, baseball and basketball games. For this project, he visited anew with many Colonial winners and wrote the "Wall of Champions" chapter. Dennis Roberson, who has worked as the event's Tournament Manager for 20 years, served as project director and research director for the book, and pulled together the above writers to help tell the Colonial tournament story. He wrote all the chapters on the event's highlights over the six decades, as well as the chapter on the tournament's charity programs, and he assisted on the first two chapters with Russ Pate. FRONT FLAP COPY Rising out of the humble Trinity River bottomland 70 years ago, the Colonial Country Club golf course and its founder, Marvin Leonard, always had big plans. Within just five years, the course nabbed a U.S. Open Championship. Within 10, it had its own PGA TOUR event. Since then, a marvelous and historic parade of champion golfers, Colonial members, tournament volunteers, sponsors, fans and charities have become part of this grand annual event. Their unique stories are intertwined with, and anchored by, the presence of one legendary man and golfer - the great Ben Hogan. Hogan and Colonial helped make each other famous in the 1940s and '50s, as they established themselves asCrenshaw, Ben is the author of 'Colonial The Tournament, Sixty Years of Greatness', published 2006 under ISBN 9781933415307 and ISBN 1933415304.

9 from $3.48
Loading marketplace prices 9 copies from $3.48 How does the rental process work?
View more