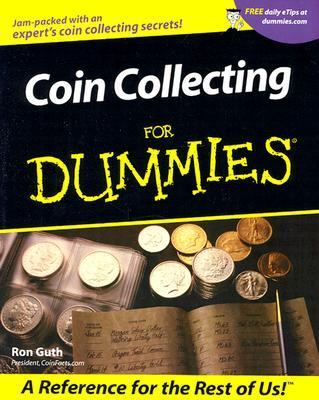 Ron Guth is a jack-of-all-trades and master of one - numismatics. Ron is a Certified Public Accountant (CPA), a licensed auctioneer, and a writer, but the bulk of his time is spent on his true love - coin collecting and dealing. Ron's battle with coin fever began when he was 12 years old (roughly 35 years ago), and he's never gotten over it. After a decade of collecting, Ron went professional in 1976 when he began working for a local coin shop in Tampa, Florida. In 1978, he partnered with David Goldsmith and purchased the Bay Area Coin Exchange in Tampa. Ron and Dave blasted through the silver boom, and then split up in 1981, when Ron moved to Evansville, Indiana (his wife's hometown) where he set up shop on First Avenue. In 1984, Ron formed Mid-American Rare Coin Auctions with Jeff Garrett of Lexington, Kentucky. The company quickly established itself as an innovative leader in the industry and, within the first year, became the fifth largest rare coin auction company in America. In 1988, Ron sold his interest in the company, went back to school to finish his Bachelor's degree in accounting and finance, and has since become a numismatic consultant and a major dealer in German coins. In 1984, Ron won the American Numismatic Association's Wayte and Olga Raymond and Health Literary awards. He has written many coin-related articles and is listed as a contributor to several books, including Walter Breen's Encyclopedia of United States Coins, Krause Publication's Standard Catalog of German Coins, Roger Cohen's American Half Cents, Walter Breen's Encyclopedia of United States Half Cents, and others. Ron has served as a numismatic consultant for many rare coin companies, including major firms such as the Professional Coin Grading Service, Heritage Numismatic Auctions, and Early American History Auctions. As a rare coin auctioneer, Ron has sold over $100 million in rare coins, including the $1.84 million 1913 Liberty Head Nickel (tied for the second most valuable coin ever sold at auction). His chant has been heard at auctions conducted by just about every major name in the business, including R.M. Smythe, Heritage Numismatic Auctions, Kagin's, Lyn Knight, David Akers, Currency Auctions of America, Ponterio and Associates, Early American History Auctions, Mid-American Rare Coin Auctions, and Superior Galleries. Ron's professional affiliations include Life Membership in the American Numismatic Association and memberships in the Rittenhouse Society, Early American Coppers Club, Colonial Coin Collectors Club, Civil War Token Society, and numerous regional and state organizations. In 1999, Ron formed CoinFacts.com, Inc., a Web site that provides free, in-depth information about U.S. coins to anyone with Internet access. In 2000, he launched PaperMoneyFacts.com to provide a similar service for paper money collectors. You can visit Ron on his Web sites at www.coinfacts.com or www. papermoneyfacts.com or contact him at ron@coinfacts.com.Guth, Ron is the author of 'Coin Collecting for Dummies', published 2001 under ISBN 9780764553899 and ISBN 0764553895.