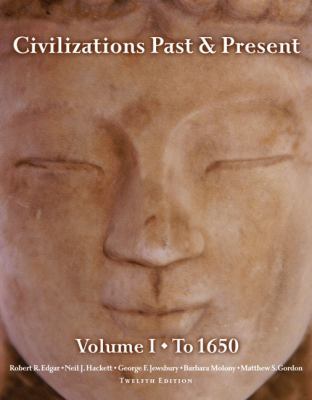 Civilizations Past & Present Twelfth Edition, Volume II (from 1300) Robert R. Edgar, et al. "An exceptional text. Clear and engaging writing with sound and current scholarship." Gary Gibbs, Roanoke College "This is the best book in the field and I recommend it without hesitation. The authors are well qualified, they can write, and they have done their homework." William McDonald, Mid-American Christian University Written by specialists in Islamic, African, Asian, East European, and ancient history, Civilizations Past & Present offers a clear and accessible analysis of diverse trends shaping world history. Now in its Twelfth Edition, this survey text is well known for its readability, with a strong narrative that examines details at levels appropriate for both students and instructors. Offering strong regional coverage in addition to highlighting the connections between the world's many cultures and regions, the book explores all of the major areas of historical study: social, political, economic, religious, cultural, and geographic. New to this Edition New co-author Matthew Gordon, a scholar in Middle Eastern history at the Miami University of Ohio, adds new perspectives to the text's coverage of the Islamic world. "Seeing Connections" features in each chapter visually illustrate the diverse linkages between the world's civilizations, religions, ideologies, arts, and social movements. A new chapter on Latin America, 1910 to present (Chapter Thirty-four), examines Latin America from World War I through the turn of the twenty-first century, including the influence of the United States, the region's role as a Cold War battlefield, and recent economic and political developments sweeping its nations. A new closing chapter on the world in the twenty-first century (Chapter Thirty-six), examines key trends shaping the world in the new millennium, including economics, technology, migration, and culture. Additional content has been added throughout the book on the Middle East, Africa, Latin America, and Oceania. Available versions of Civilization Past & Present Combined Volume ISBN 10: 0-205-57430-0 ISBN 13: 978-0-205-57430-8 Volume I (to 1650) ISBN 10: 0-205-57375-4 ISBN 13: 978-0-205-57375-2 Volume II (from 1300) ISBN 10: 0-205-57431-9 ISBN 13: 978-0-205-57431-5 Please visit us at www.ablongman.com/historyGeorge F. Jewsbury is the author of 'Civilizations Past & Present, Volume 1 (to 1650) (12th Edition)', published 2007 under ISBN 9780205573752 and ISBN 0205573754.