Cinderella Story My Life in Golf 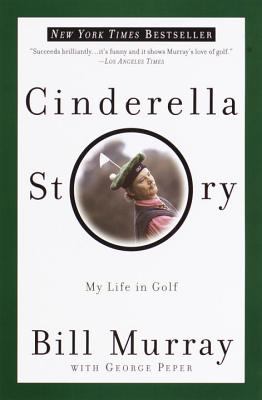 My father was a very difficult laugh. Adults found him very funny. But his children had a tough time cracking him up. One of my strongest childhood impressions is falling off of my chair at the dinner table while doing a Jimmy Cagney impression. I hit my head very hard on the metal foot of the table leg, and it hurt terribly. But when I saw my father laughing, I laughed while crying at the same time. I guess that was some kind of beginning. My father, Edward, had nine kids: Edward; one year later, Brian; two years later, Nancy; two years after that, Peggy; one year later, Billy; two years later, Laura; four years later, Andrew; two years later, John; four years later, Joel. In those gaps were three children lost in pregnancy, including a set of twins. Rest in peace, little Murrays. My mother, Lucille, bore the nine children, had those eleven pregnancies, and outlived my father by twenty-one years. Late in her life she told me that having babies into her middle age had kept her young. As a young man, I thought that my father had been responsible for any sense of humor that I inherited and that it passed through him from my grandfather, who owned a bow tie that lit up, which he used very tastefully. My siblings pointed out to me later, "You're just doing Mom." This was so shocking all I could think was . . . "You mean my father was not my mother?" Unless their father was a drunk or a brute, boys often don't think to take after their mother. Until it's too late. Anyway, all of the kids ended up "doing Mom." There are four of us who've tried show business. Five, if you insist on counting my sister the nun, who does liturgical dance. To date, she's the only one insisting that she's in the business. I will include a liturgical dancer in show business the day that one of them gets an encore . . . the day that I hear . . . "More! In the name of the Father, and of the Son, more! We are not getting off of our knees until you come on back out of the sacristy and give us just one more!" The proof is, you could not be doing my Mom and be doing liturgical dance. It's one or the other. The moment of actual mother and child comic union came only after Brian and I had made it in show business to the tune of buying a new furnace for the house. This somehow made us legit--and then some. She clutched the entertainment industry to her success-breeding breast as time warped, and life now jumped off the pages of Photoplay magazine. She was an insider, a major Hollywood player, and an authority on all things entertainment. And like a player, very, very vulnerable. The show business windfall had made possible a summer lake cottage rental, just over the Wisconsin state line. I'd called her from New York. "Sounds nice. Oh, nuts, that's probably too far to drive." "What's too far to drive, Billy?" "Well, it's up above Rhinelander. It's a place called the Showboat. It's a bit of a hump, but it is an incredible show to see. An amazing show. I guess you would probably call it a variety show? And they're all people who live up there, and they do the show up in the north woods. It's the only place I've ever seen them. I mean, this a show you would never see in New York. Ever. You have to go there to see it." Well, Lucille bit like a spring muskie. I felt something on the line, and I thought it might be big. But it was a week before I reeled the whole story into the boat. Let me tell you about the show at the Showboat. A beautiful horseshoe-shaped room, windows framing a gorgeous lake. Photos of the great Milwaukee Braves. An offstage voice introduces our emcee, who turns out to be the offstage voice. He bounces on, almost into your lap. The tables are that close to the stage. Unlike most of the men in the north woods, he wears high zippered patent leather bootMurray, Bill is the author of 'Cinderella Story My Life in Golf' with ISBN 9780767905220 and ISBN 0767905229.