Church History, Volume One: From Christ to Pre-Reformation: The Rise and Growth of the Church in Its Cultural, Intellectual, and Political Context 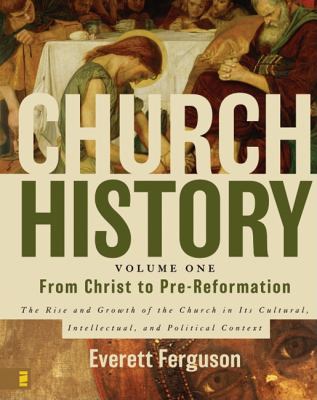 Church History Volume 1: From Christ to Pre-Reformation Copyright © 2005 by Everett Ferguson Requests for information should be addressed to: Zondervan, Grand Rapids, Michigan 49530 Library of Congress Cataloging-in-Publication Data Ferguson, Everett, 1933- Church history / Everett Ferguson. p. cm. Includes bibliographical references. ISBN-10: 0-310-20580-8 (v. 1) ISBN-13: 978-0-310-20580-7 1. Church history-Textbooks. I. Title. BR145.3.F47 2004 270-dc22 2004020348 This edition printed on acid-free paper. Unless otherwise indicated, the photos were taken by and are the property of the author. All Scripture quotations, unless otherwise indicated, are taken from the Holy Bible: New International Version ®. NIV®. Copyright © 1973, 1978, 1984 by International Bible Society. Used by permission of Zondervan. All rights reserved. All rights reserved. No part of this publication may be reproduced, stored in a retrieval system, or transmitted in any form or by any means-electronic, mechanical, photocopy, recording, or any other-except for brief quotations in printed reviews, without the prior permission of the publisher. Interior design by Tracey Walker Printed in the United States of America 05 06 07 08 09 10 11 12 /?DCI/ 10 9 8 7 6 5 4 3 2 1 The Setting for the Story's Beginning Three concentric circles of influence circumscribed the world in which early Christianity began. From the outside moving in, these influences were the Roman, the Greek, and the Jewish. The pattern of growth in the early church was the reverse, from the Jewish, to the Greek, to the Roman worlds. Unlike the mathematical image, however, these worlds were not sharply differentiated from each other, and the boundaries were quite porous. Nevertheless, the classification of influences is helpful in grasping the environment in which the early church began. Moreover, these influences remained formative for much of subsequent Christian history. I. THE ROMAN WORLD Luke sets the story of Jesus and the early church firmly within Roman history, noting Jesus' birth under the emperor Augustus, his ministry under Tiberius, and mentioning the Roman governors and other officials with whom Jesus and later Paul had encounters (Luke 2:1-2; 3:1; Acts 13:7; 18:12; 24:27). Rome provided the larger governmental, military, and legal context of early Christianity. At the birth of Jesus, Rome had recently completed the transition from the Republic to the imperial Principate under Augustus (27 BC-AD 14). Not long before that, the Roman general Pompey had conquered Palestine in 63 BC, and thereafter Rome ruled the Jewish homeland, alternating various administrative arrangements through which it exercised its will: legates based in Syria; client kings like Herod the Great, during whose rule Jesus was born; and governors like Pontius Pilate, under whom Jesus was crucified. The organization of the empire seems to have provided a pattern for the eventual development of the church's hierarchy, and procedures in the senate at Rome and at city councils influenced the conduct of church synods. The army-the legions made up of Roman citizens and the auxiliaries composed of native peoples-was a constant presence on the frontiers and in provinces where disturbances were frequent. Among the peacetime duties of soldiers were the building of roads and securing safety of travel; Christian travelers, whether for business or religious purposes, used these roads and carried the Christian message with them. Roman law is one of Rome's enduring legacies to the Western world. When charges were brought against Christians, Roman magistrates and Roman law decided their cases. The imperial cult (the giving of divine honors to the emperor and his famEverett Ferguson is the author of 'Church History, Volume One: From Christ to Pre-Reformation: The Rise and Growth of the Church in Its Cultural, Intellectual, and Political Context', published 2005 under ISBN 9780310205807 and ISBN 0310205808.