Chronicle of a Myth Foretold The Washington Consensus in Latin America 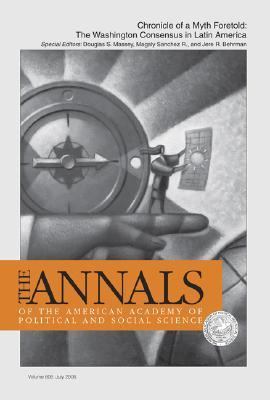 During the 1990s, the United States encountered an unprecedented economic upsurge. The duration and scope of this boom led many policymakers in D.C., to believe they had finally found a magic formula for sustained economic growth and seamless national development. Labeled the Washington Consensus, this free-market approach was a shift away from regulation and government intervention toward allowing the markets work themselves out on a global level. Was it magic? After all, this was an era where the markets for goods, services, capital, and labor burst forth from North America, Western Europe, and Japan to stretch across the globe. The Soviet Union had collapsed and East and Southeast Asian economies were flourishing. "Globalization and A New World Order" became the slogans of the day. In what some scholars and policymakers view as a massive social experiment, the U.S. Treasury and the International Monetary Fund (IMF) began leaning on Latin American countries to dismantle their economic regime of import substitution industrialization (ISI). Without a firm understanding of the complexities involved, international lenders pressed for implementation of the Washington Consensus ? advocating governments to step out of the way and let the markets do their work. Yet every nation has a different history when it comes to the process of market creation. The attempt to apply a blanket formula on countries with divergent political, social, and cultural legacies flopped miserably. Supporters of the Washington Consensus discovered their magic formula was merely a myth. Although Chile, which already had strong institutional foundations, came closest to succeeding in the implementationof the Washington Consensus, places like Mexico, Peru, Venezuela, and Argentina met with political and economical turmoil that shook their countries to the core. Pulling from a wellspring of knowledge, expertise, and experience from representatives of sociology, economics, demography, anthropology, and urban studies, this special issue of "The ANNALS" provides a coherent chain of evidence that reveals how the idea for structural adjustment in Latin America arose, how it was applied, the negative consequences it had, and the lessons learned. Sprung from a request by the Andrew W. Mellon Foundation on "Urban Studies and Demography," this collection of thought-provoking articles is the result of a two-year pilot research project conducted by faculty and students affiliated with the Population Studies Center and the Urban Studies program at the University of Pennsylvania. Students, researchers, and policymakers in public affairs, economics, anthropology, international affairs, sociology, urban studies, population studies, and others will gain clarity and insight into this complex phase of world economic history.Sanchez, Magaly is the author of 'Chronicle of a Myth Foretold The Washington Consensus in Latin America' with ISBN 9781412950084 and ISBN 1412950082.