Chinese Warfighting The Pla Experience Since 1949

by Ryan, Mark A., Finkelstein, David M., McDevitt, Michael A. 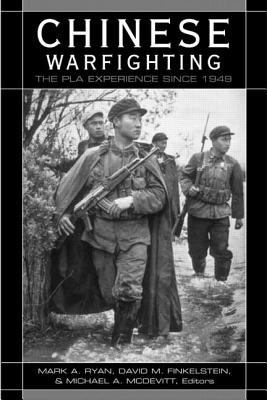 by Ryan, Mark A., Finkelstein, David M., McDevitt, Michael A.

Cheng Feng, a Chinese scholar, is a former member of the People's Liberation Army David M. Finkelstein is the director of Project Asia, The CNA Corporation's Asian security studies center. A retired U.S. Army Officer, he is a graduate of West Point, the Army Command & General Staff College, and the Army War College, and holds a Ph.D. in Chinese history from Princeton University. He served in Panmunjom, Korea, supporting Military Armistice Commission talks among the UN Command, the North Korean People's Army, and the Chinese People's Volunteers. Dr. Finkelstein has published widely on current Chinese security issues Paul H.B. Godwin was professor of international affairs at the National War College, Washington, DC until his 1998 retirement and is currently a consultant and nonresident scholar in the Atlantic Council's Asia-Pacific Program. His teaching and research specialties focus on Chinese defense and security policies He Di is an investment banker based in Hong Kong. Before entering the business world, he was assistant director of the Institute of American Studies within the Chinese Academy of Social Sciences Alexander C. Huang is professor of international relations at the Graduate Institute of International Affairs and Strategic Studies, Tamkang University, Taiwan and vice president of the Taiwan-based Chinese Eurasian Foundation. Dr. Huang has worked as a senior fellow in the International Security Program at the Center for Strategic and International Studies and as a visiting fellow in the Center for Northeast Asian Policy Studies at the Brookings Institution. Henry J. Kenny is a senior analyst and studies director at The CNA Corporation. He served as an infantry officer in Vietnam, and has taught at the U.S. Military Academy, American University, George Washington University, and the Institute for International Relations in Hanoi. He has worked for the U.S. Arms Control and Disarmament Agency, the American Embassy Tokyo, and the Senate Foreign Relations Committee. Dr. Kenny is the author of The American Role in Vietnam and East Asia and Shadow of the Dragon (dealing with the relationship between China and Vietnam), among other publications Xiaobing Li is professor of history and associate director of Western Pacific Institute at the University of Central Oklahoma. He is a past president of both the Association of Chinese Historians in the United States and Chinese Professors of Social Sciences in the United States, and has also worked at the Chinese Academy of Social Sciences in Beijing. Dr. Li, who served in the PLA, has authored and edited a number of books Rear Admiral Michael A. McDevitt, U.S. Navy (Ret.), is director of The CNA Corporation's Center for Strategic Studies. During his Navy career he held four atsea commands including command of an aircraft carrier battle group. He served in the Office of the Secretary of Defense during the first Bush Administration and then as Director for Strategy, War Plans, and Policy for the U.S. Pacific Command. Admiral McDevitt holds advanced degrees from Georgetown University and the National War College, and his final Navy post was commandant of the National War College Thomas Robinson is president of American Asian Research Enterprises in McLean, Virginia. He was adjunct professor of national security at Georgetown University and course chair for China at the Foreign Service Institute, and has otherwise divided his professional time between research institutes, including RAND, Council on Foreign Relations, and the American Enterprise Institute, and university teaching, including Columbia, Dartmouth, Washington, UCLA, and the National War College. Dr. Robinson has published widely on China, Russia, Sino-Soviet relations, national security, American-Asian relations, and international relations forecasting Mark A. Ryan is a research analyst within Project Asia at The CNA Corporation. He has taught at Georgetown University and George Washington University, and has worked for the U.S. Arms Control and Disarmament Agency and the U.S. Information Agency Larry M. Wortzel is director of the Asian Studies Center of The Heritage Foundation in Washington, DC. During his 32-year U.S. Army career he held infantry and military intelligence posts, and earned his Ph.D. in political science at the University of Hawaii. He was the Army attache at the American Embassy in China and director of the Strategic Studies Institute of the U.S. Army War College Yu Bin is Associate Professor in the Political Science Department of Wittenberg University. He is a senior associate of the Shanghai American Studies Center and an associate analyst for the Pacific Forum in Hawaii, and has been a fellow at the East-West Center in Hawaii and the China Center of International Studies in Beijing. Dr. Yu, the editor and coauthor of several books, served in the PLA infantry from 1968 to 1972 Shu Guang Zhang is professor of international relations within the department of history at the University of Maryland Xiaoming Zhang taught history at Texas Tech University and is presently associate professor of history at Texas A&M International UniversityRyan, Mark A. is the author of 'Chinese Warfighting The Pla Experience Since 1949' with ISBN 9780765610874 and ISBN 0765610876.