Cato A Tragedy, and Selected Essays 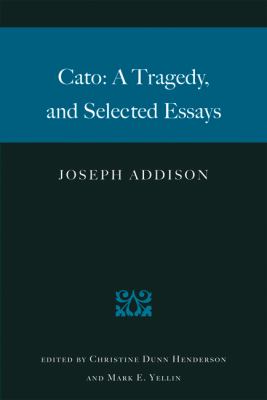 "A day, an hour, of virtuous liberty is worth a whole eternity in bondage." -- Joseph Addison, Cato 1713. Joseph Addison was born in 1672 in Milston, Wiltshire, England. He was educated in the classics at Oxford and became widely known as an essayist, playwright, poet, and statesman. First produced in 1713, Cato, A Tragedy inspired generations toward a pursuit of liberty. Liberty Fund's new edition of Cato: A Tragedy, and Selected Essays brings together Addison's dramatic masterpiece along with a selection of his essays that develop key themes in the play. Cato, A Tragedy is the account of the final hours of Marcus Porcius Cato (95-46BC), a Stoic whose deeds, rhetoric, and resistance to the tyranny of Caesar made him an icon of republicanism, virtue, and liberty. By all accounts, Cato was an uncompromisingly principled man, deeply committed to liberty. He opposed Caesar's tyrannical assertion of power and took arms against him. As Caesar's forces closed in on Cato, he chose to take his life, preferring death by his own hand to a life of submission to Caesar. Addison's theatrical depiction of Cato enlivened the glorious image of a citizen ready to sacrifice everything in the cause of freedom, and it influenced friends of liberty on both sides of the Atlantic. Captain Nathan Hale's last words before being hanged were, "I only regret that I have but one life to lose for my country," a close paraphrase of Addison's "What pity is it that we can die but once to serve our country!" George Washington found Cato such a powerful statement of liberty, honor, virtue, and patriotism that he had it performed for his men at Valley Forge. And Forrest McDonald says in his Foreword that "Patrick Henry adapted his famous 'Give me liberty or give me death' speech directly from lines in Cato." Despite Cato's enormous success, Addison was perhaps best-known as an essayist. In periodicals like the Spectator, Guardian, Tatler, and Freeholder, he sought to educate England's developing middle class in the habits, morals, and manners he believed necessary for the preservation of a free society. Addison's work in these periodicals helped to define the modern English essay form. Samuel Johnson said of his writing, "Whoever wishes to attain an English style, familiar but not coarse, and elegant but not ostentatious, must give his days and nights to the study of Addison."Addison, Joseph is the author of 'Cato A Tragedy, and Selected Essays', published 2004 under ISBN 9780865974432 and ISBN 0865974438.