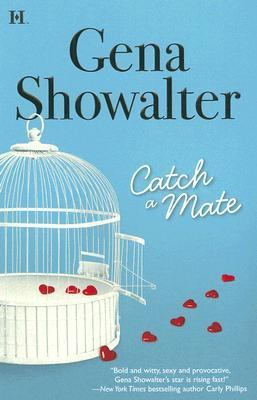 Do you believe in love at first sight or should I walk by again?IN LIFE, there was only one guarantee and that, Jillian Greene hated to say, was that all men were pigs. "Will you repeat your question?" she asked her coworker and friend, Selene Garnett. "I'm positive I misheard." "Nope. You didn't mishear. I asked what you would say to a man who told you to take off your panties so he could smell them." Jillian gazed over at Selene, a blond goddess in black leather, who was untouchable in a way that made men want to touch her. And keep touching her. Over and over again. "Is that a trick question?" "Hardly." Selene stood in the opening of Jillian's cubicle, slender arms braced on the blue makeshift walls. Her hands covered the two posters Jillian had pasted up only a short while ago. One said, Where There's a Man, There's a Lie. The other read, Behind Every Good Man Is a Gun. "A guy said it to me last night," Selene added. "I was so shocked, I froze." "Do you like this man?" "Please." Selene rolled her eyes. "He was a target." "In that case, you tell him the only way you'll allow him to sniff your underpants is if they've been laced with the Ebola virus." "I knew you'd have the perfect reply." Selene smiled that cool smile of hers and practically floated down the hall on a cloud of violets and jasmine, throwing over her shoulder, "Danielle owes me ten bucks." Oh, yes. Men were pigs. Some were piglets, all oink and no bite. Some were swineintraining, teetering on the edge between man and boar. Some were Miss Piggies, no explanation needed. And some were hungry hogs, devouring everything in their path. Those, Jillian hated most. But no matter where a guy fell on the Pigometer, Jillian didn't let his bestial qualities upset her. Since men were oinkers, it was safe to say that she was the slaughter house. She quite happily cut the different breeds into bacon and served them to their owners on a silver platter. It was her job and her greatest pleasure. She (and Selene) worked for Catch a Mate. How deliciously romantic that sounded, right? Except Catch a Mate was the place women came to test their significant other's trustworthiness. Here's how it broke down: Jane Doe enters the CAM office, cites three incidents that make her believe her man has cheated, then flips through a book of photos and chooses the face and form that will most appeal to her husband, boyfriend or asshole lover too cheap to fork over a ring. The woman she picksa.k.a. the baitis then given the man'sa.k.a. the target'sschedule and proceeds to "accidentally" meet him, laying on the charm. Of course, she's wearing a hidden camera and a microphone, recording his every transgression. Jillian was bait. She was paid to smile, to lie. To flirt. These already attached men ate it up, too, no spoon required, proving just how disgusting they really were. Some people (those who were guilty) might consider what she did entrapment. Some people (those who wereveryguilty) might consider what she did wrong. But she never kissed, touched or screwed the men, just allowed them to incriminate themselves with their own words, so her conscience was safe. Besides, there wouldn't be a problem if her targets would simply send her on her way. Instead, they returned her smiles, told her lies of their own and flirted back. They were willing to forget years of fidelity, sweep aside their honor and completely disrespect their lover for one supposed night of wildness. To Jillian, they deserved what they got. She never told her clients their men had cheated; that was her boss's job. However, she often watched those conversations on a monitor in another room, and what she saw was heartbreaking. Tears, curses, depression. The emotions of the victims of infidelity ran the gamut, but they all had one thing in common: a ruineShowalter, Gena is the author of 'Catch a Mate ', published 2007 under ISBN 9780373772353 and ISBN 0373772351.