Case Closed Lee Harvey Oswald and the Assassination of JFK 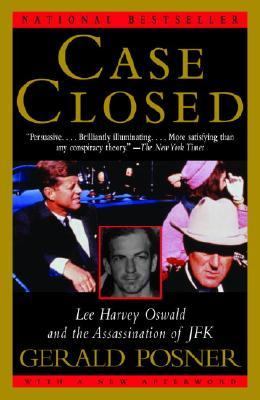 1 "Which One Are You?" President John F. Kennedy had been dead less than an hour. J. D. Tippit, only the third Dallas policeman in a decade to die in the line of duty, was killed shortly after the President. Rumors swept the city. Dealey Plaza, the site of the presidential assassination, was in pandemonium. Dozens of witnesses sent the police scurrying in different directions in futile search of an assassin. While most police mobilized to hunt the President's killer, more than a dozen sped to Dallas's Oak Cliff, a quiet middle-class neighborhood, to search for Tippit's murderer. At 1:46 P.M., after an abortive raid on a public library, a police dispatcher announced: "Have information a suspect just went in the Texas Theater on West Jefferson." Within minutes, more than six squad cars sealed the theater's front and rear exits. Police armed with shotguns spread into the balcony and the main floor as the lights were turned up. Only a dozen moviegoers were scattered inside the small theater. Officer M. N. McDonald began walking up the left aisle from the rear of the building, searching patrons along the way. Soon, he was near a young man in the third row from the back of the theater. McDonald stopped and ordered him to stand. The man slowly stood up, raised both hands, and then yelled, "Well, it is all over now." In the next instant, he punched McDonald in the face, sending the policeman's cap flying backward. McDonald instinctively lurched forward just as his assailant pulled a pistol from his waist. They tumbled over the seats as other police rushed to subdue the gunman. The gun's hammer clicked as the man pulled the trigger, but it did not fire. After the suspect was handcuffed, he shouted, "I am not resisting arrest. Don't hit me anymore." The police pulled him to his feet and marched him out the theater as he yelled, "I know my rights. I want a lawyer." A crowd of nearly two hundred had gathered in front of the building, the rumor circulating that the President's assassin might have been caught. As the police exited, the crowd surged forward, screaming obscenities and crying, "Let us have him. We'll kill him! We want him!" The young man smirked and hollered back, "I protest this police brutality!" Several police formed a wedge and cut through the mob to an unmarked car. The suspect was pushed into the rear seat between two policemen while three officers packed into the front. Its red lights flashing, the car screeched away and headed downtown. The suspect was calm. Again he declared, "I know my rights," and then asked, "What is this all about?" He was told he was under arrest for killing J. D. Tippit. He didn't look surprised. "Police officer been killed?" he asked. He was silent for a moment, and then he said, "I hear they burn for murder." Officer C. T. Walker, sitting on his right side, tried to control his temper: "You may find out." Again, the suspect smirked. "Well, they say it just takes a second to die," he said. One of the police asked him his name. He refused to answer. They asked where he lived. Again just silence. Detective Paul Bentley reached over and pulled a wallet from the suspect's left hip pocket. "I don't know why you are treating me like this," he said. "The only thing I have done is carry a pistol into a movie." Bentley looked inside the wallet. He called out the name: "Lee Oswald." There was no reaction. Then he found another identification with the name Alek Hidell. Again no acknowledgment. Bentley said, "I guess we are going to have to wait until we get to the station to find out who he actually is." Shortly after 2:00 P.M., the squad car pulled into the basement of the city hall. The police told the suspect he could hide his face from the press as they entered the building. He sPosner, Gerald is the author of 'Case Closed Lee Harvey Oswald and the Assassination of JFK', published 2003 under ISBN 9781400034628 and ISBN 1400034620.