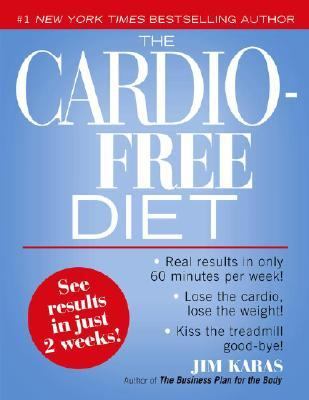 Chapter One Cardio's Reign of Terror In 1977 Jim Fixx published his first book,The Complete Book of Running.It sold more than a million copies, and at the time it was the bestselling nonfiction book ever published. With that one book, the whole cardio craze was unleashed. Since then, we have heard hundreds, if not thousands, of doctors, exercise physiologists, and fitness experts go on and on about all the benefits of cardiovascular exercise. In 1981 I was living in London and was about to turn twenty-one. Determined to drop some weight (I just couldn't face that milestone birthday feeling so out of shape), I took up running. I was twenty pounds overweight and trying to quit smoking for the fifty-third time, so I used the running to offset the extra calories I feared I would be consuming when a cigarette wasn't in my mouth. I didn't gain any more weight, but I didn't lose any either. For months I was running every day for an hour to an hour and a half, for a total of about ten hours per week, and didn't lose an ounce. If you eat, eat, eat and run, run, run (or perform any form of cardio) as I did, at the end of the day, you won't lose any weight. Learn from my mistake, and don't blow ten hours a week exercising for nothing. As running became more popular, high-impact aerobics was also hitting the scene. To relieve some stress and try to get rid of the extra pounds (since the running didn't work), I took up high-impact aerobics, still convinced that cardio was the key to weight loss. One Saturday the teacher did not show up for the eight a.m. high-impact aerobics class. About a hundred of us, mostly overweight regulars, stood around for fifteen minutes until I said, "If someone can find a tape, I'll teach." I had the routine memorized, which is never a good thing (as you will soon learn), so up I went to teach the class. Since the teacher didn't show up for the nine o'clock class either, I taught that one as well. After that class, the manager of the club approached me and asked if I wanted a job as an instructor. I asked what the offer was and he said, "You get four dollars an hour plus a free membership." So began my career as an aerobics instructor. From that day on, my doomed relationship with cardio was official. Okay, I want to be honest. I am a recovering cardioholic. I have been "clean" for many, many years, and continue to stay as far away from straight cardio as possible, and I'm in the best shape of my life! But for quite a long period of time, I, too, was adamant that cardio was the key to weight loss. Boy, was I ever wrong. Here is the rest of my history with cardio, which I refer to as the Karas Cardio Rap Sheet: Low-impact aerobics:Same concept as high-impact, but less jumping, so it wasn't quite as painful on my body, but I still didn't lose any weight. The Step:Similar to low-impact, but there was a lot of flailing around like a crazy person and almost tripping and falling as I went up and down, up and down a step. The Slide:It was sort of fun to slide back and forth on a slick surface. I didn't lose any weight, but I did relive childhood memories of sliding on the ice. Spinning:Spinning really took the cardio world by storm. To this day, spin class is popular among those who still haven't figured out that all that cardio won't get them the results they are looking for. And for the record, spinning is brutal on your body (more on that in Chapter 3). Tae Bo:I jumped around and repeatedly popped, or hyperextended, my joints, which can lead to major pain and injury. When you box, you are supposed to hit something, not air. Boot Camp:Since I wasn't in my early twenties and my daily life didn't resemble a war zone, this wasn't a good fit either, nor should it be for any of you.