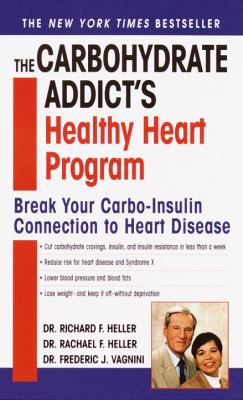 Three Wishes for a Second Chance Chance favors the prepared mind.--Louis Pasteur In the game of life, it was the bottom of the ninth, and the three of us were about to strike out: out of hope, out of luck, and out of time. But we did not strike out. Instead, we turned our lives around and took back our health (together with our energy, sanity, and joy). In the pages to come, you will learn about the scientific discovery that literally gave us back our lives. You will learn, too, how you can break free from insulin's powerful potential for heart disease--and stay free. First, come join us as we share our stories with you, for our discovery comes not only from mountains of scientific literature, books, and test tubes but from the difficult lessons that life has provided us as well. So Perfect a Purpose: Dr. Rachael Heller's Story I believe that things happen for a reason or, at least, that with the right attitude something good can come out of even the worst of experiences. I never really stopped believing this, although, for many years, when the challenges were hard and I was very young, I could have argued the other side quite well. I don't have the simple childhood memories that so many people have of friends and playing games, of parties and adventures, and of a whole wide world to discover and explore. I remember sadness and pain and a permeating truth that seemed to shape my every action and every thought. In a child's world of wanting to belong, I lived with the unforgiving fact that I was different: I was fat. And every interaction--from my brother's unrelenting teasing to my classmates' ridicule to strangers' disapproving stares--told me in word and look that being fat was a very bad thing and, what was worse, that I was to blame. My parents, though thin in their youth, fought a losing battle with their weight as they approached their late thirties. By the time that each had reached forty, there were clear signs of oncoming heart problems. My mother's blood pressure was out of control, and both my parents showed the telltale signs of diabetes. Within a few short years, my father's blood pressure was far above normal. My mother had suffered three heart attacks, and we lived with an oxygen tank in the closet. I slept lightly, listening for any signs of her distress. In the blink of an eye, within four short years, they were both gone--my father at fifty-two, my mother at fifty-five. My older brother, fearful of becoming overweight and suffering the same ill health as my parents, chose what he considered an acceptable alternative, but within a short time he was as addicted to diet pills as he had been to junk foods and sweets. When he added other addictions to his repertoire, his immune system failed. He never saw his fortieth birthday, losing a long and terrible battle to a rare form of leukemia that preyed on his already-compromised body. Before I was out of my twenties, both my parents and my older brother had died. I was young, alone, sick, fat, and desperately poor. I was young and alone, and most of all, I was sick and fat as well. I had no money, no real friends, and no one to whom I could turn. I had just been witness to what could be likened to a terrible automobile accident, and although I wanted desperately to avoid the collision myself, nothing I did seemed to make any difference. I had dreams of being behind the wheel of an old car, and though I saw it heading for a crash, I could not make the brakes respond. I stomped my foot on the brake pedal, I tried desperately to turn the wheel, I even tried to open the door and jump out, but nothing I did had any effect. And I awoke in terror to find that my nightmare was simply a reflection of my waking reality. Some people say that, although they had been chubby as kids, they never suffered any health-related problems until they hit middle age. Not me. At twelve years of age, I was hospHeller, Richard is the author of 'Carbohydrate Addict's Healthy Heart Program Break Your Carbo-Insulin Connection to Heart Disease' with ISBN 9780345426116 and ISBN 0345426118.