by Chaucer, Geoffrey, Hieatt, A. Kent, Hieatt, Constance B. 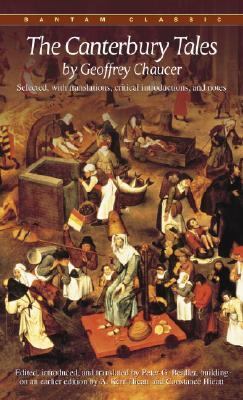 by Chaucer, Geoffrey, Hieatt, A. Kent, Hieatt, Constance B.

The Knight's Tale 1 Introduction 1 The Knight's Tale, which mostly takes place in ancient Athens, is the conflicted love story of two royal Theban cousins who love the same woman. Because "The Knight's Tale" is by far the longest and most complex of the Canterbury Tales presented in this volume, a quick summary of the action of the four parts of the tale may help readers encountering it for the first time: Part I. On his way back to Athens with his bride, Hypolita, and his sister-in-law, Emily, Duke Theseus responds to the pleas of some grieving widows by defeating Creon, the tyrant of Thebes. Among the bodies of the defeated army, he finds near death the royal cousins Palamon and Arcite. Rather than kill them, Theseus takes them back to Athens and places them in prison. From their barred prison window, the two young men see the lovely Emily and both fall in love with her. Arcite after a time is released but banished from Athens on pain of death, while Palamon remains in prison. The two are envious of each other's condition. Part II. Arcite disguises himself as a common laborer and comes back to Athens, where he gets a job working in Emily's household. Meanwhile, Palamon escapes from prison, and the rival cousins chance to meet in a grove near Athens. While Palamon and Arcite are fighting a bloody duel, Theseus, Hypolita, and Emily, out hunting, by chance come upon them in a grove. At first angry, Theseus soon relents, sets both of his enemies free, and invites them to return in a year, each with a hundred knights, to take part in a glorious tournament, with Emily's hand going to the winner. Part III. Theseus builds a splendid amphitheater in preparation for the tournament and places on its west, east, and north borders elaborately decorated temples to Mars, Venus, and Diana. When the two troops of warriors come back for the tournament, the three principals each pray to one of the planetary deities. Palamon prays to Venus, not for victory but for the hand of Emily. Emily prays to Diana to be spared marriage to either Palamon or Arcite, praying instead to remain a maiden always. Arcite prays to Mars for victory in the tournament. Part IV. Just before the tournament begins Theseus declares that he wants no lives to be lost and restricts the kinds of weapons that may be used. He sets out the rules of the game, the primary one being that the winning side will be the one that takes the loser to a stake at the end of the field. After vigorous fighting, Arcite's men drag the wounded Palamon to the stake. No sooner is Arcite declared the winner than Saturn commands Pluto, god of the underworld, to send a diabolical fury to frighten Arcite's horse. Arcite is thrown and crushed by his own saddle bow. After an elaborate funeral and the passage of some years, Theseus tells Palamon and Emily to marry, and they happily do so. Arching over the story of the warriors and lovers down on the earth below is a heavenly conflict among the gods or, more precisely, among the planetary or astrological influences that were thought to control the affairs of men. Indeed, a key feature of "The Knight's Tale" is the prayers of the three principal characters to these influences. Closely tied up with the question of whether Palamon or Arcite will get the young woman they both love is the question of how the powerful Saturn will settle the conflicting demands on him of Mars, Venus, and Diana. Chaucer's main source for "The Knight's Tale" is Giovanni Boccaccio's several-hundred-page-long Teseida. Readers who are upset at having to read Chaucer's long and leisurely story of Palamon, Arcite, and Emily should thank Chaucer for streamlining a story thaChaucer, Geoffrey is the author of 'Canterbury Tales', published 1982 under ISBN 9780553210828 and ISBN 0553210823.