Can't Take My Eyes off of You: One Man, Seven Days, Twelve Televisions 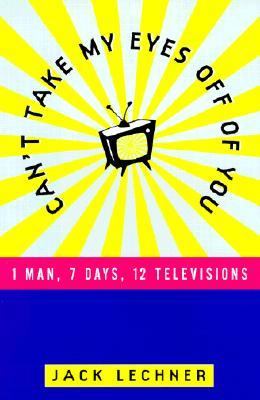 In April 1967, a man named Charles Sopkin performed a dangerous experiment upon himself. He brought six television sets into his New York apartment, and proceeded to spend an entire week watching them, from Sunrise Sermonette to The Late, Late Show. The result of Sopkin's experiment was a book called Seven Glorious Days, Seven Fun-Filled Nights. It provides not only a snapshot of the state of popular culture during one week in the late Sixties, but also a moment-by-moment account of an otherwise sane man doing something completely crazy. In September 1999, thirty-two years after Charles Sopkin watched Channel 2 sign off at 6:12 a.m. with the traditional shot of the flag and the National Anthem--stations went off the air in those days--I decided to repeat Sopkin's experiment. The obvious question is: Why? Like television itself, the answer is complex and multifaceted. One reason is that Seven Glorious Days was a cherished book of my youth, which probably gives you a good idea of my youth. I was already obsessed with the media at ten years old, and I was happy to learn that someone else was equally obsessed. Besides, the book was sitting around our house in the first place because my mother knew Charles Sopkin. After graduating from Wellesley, she lived in Manhattan with a girl named Judy Simon. Judy had a brief romance with Sopkin, an editor at various magazines and publishing houses. It ended badly, but that's another story. (As a kid, the part I wanted to hear about was how Mom and Judy lived next door to a trained chimpanzee named Kokomo, who kept them awake riding his unicycle at all hours.) Another reason for my foolhardiness is that both the world and television have changed a lot since 1967--could anyone then have imagined the sheer number of channels available today?--and a week of TV immersion in 1999 might prove as revealing about the state of American popular culture now as Sopkin's week did then. This is a time of transition for television. The original networks are being watched by fewer people than ever before--although they charge higher ad rates than ever before too. Young people turn increasingly to computers for relaxation, and while they certainly watch television, it doesn't have the same claim on their lives that it did on my generation. But when they do watch, they have more options, because the number of channels has grown exponentially. Our local cable system on the Upper West Side of Manhattan features seventy-five different channels, and downtown you can get ninety-two. Only ten years ago, when Bill McKibben analyzed a single day of television in his book The Age of Missing Information, he continually referred to "the cable channels" as if they were a vast, undifferentiated sea of low-budget mediocrity. Now the cable sea is differentiated and higher-budget, and some of it isn't even mediocre. By contrast, Charles Sopkin's six-channel universe of 1967 looks relatively orderly. Of course, he didn't think so at the time. Every generation since the time of ancient Rome has complained that things are deteriorating--check out Horace and Juvenal if you doubt me--and Sopkin was no exception to the rule. At the end of Seven Glorious Days, Seven Fun-Filled Nights, he despaired at the state of a medium that surely couldn't get much worse. "I naively expected that the ratio would run three to one in favor of trash," he wrote. "It turned out to be closer to a hundred to one." The question is, does Sopkin's ratio still apply? And even if it does, what kind of trash is it, anyway? As archaeologists know well, trash can be as revealing as treasure. There's yet another reason I felt compelled to follow Sopkin's trail. While watching fifteen hours of TV a day may be standard operating procedure for any number of people, it takes genuine effort for me. I'm a natural multiprocessor; my wife complains that I can't tie my shoes without reLechner, Jack is the author of 'Can't Take My Eyes off of You: One Man, Seven Days, Twelve Televisions' with ISBN 9780609606810 and ISBN 0609606816.