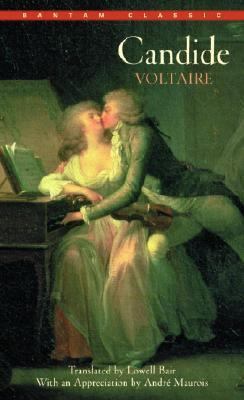 CHAPTER I How Candide was brought up in a beautiful castle, and how he was driven from it. In the castle of Baron Thunder-ten-tronckh in Westphalia, there once lived a youth endowed by nature with the gentlest of characters. His soul was revealed in his face. He combined rather sound judgment with great simplicity of mind; it was for this reason, I believe, that he was given the name of Candide. The old servants of the household suspected that he was the son of the baron's sister by a good and honorable gentleman of the vicinity, whom this lady would never marry because he could prove only seventy-one generations of nobility, the rest of his family tree having been lost, owing to the ravages of time. The baron was one of the most powerful lords in Westphalia, for his castle had a door and windows. Its hall was even adorned with a tapestry. The dogs in his stable yards formed a hunting pack when necessary, his grooms were his huntsmen, and the village curate was his chaplain. They all called him "My Lord" and laughed when he told stories. The baroness, who weighed about three hundred fifty pounds, thereby winning great esteem, did the honors of the house with a dignity that made her still more respectable. Her daughter Cunegonde, aged seventeen, was rosy-cheeked, fresh, plump and alluring. The baron's son appeared to be worthy of his father in every way. The tutor Pangloss was the oracle of the household, and young Candide listened to his teachings with all the good faith of his age and character. Pangloss taught metaphysico-theologo-cosmonigology. He proved admirably that in this best of all possible worlds, His Lordship's castle was the most beautiful of castles, and Her Ladyship the best of all possible baronesses. "It is demonstrated," he said, "that things cannot be otherwise: for, since everything was made for a purpose, everything is necessarily for the best purpose. Note that noses were made to wear spectacles; we therefore have spectacles. Legs were clearly devised to wear breeches, and we have breeches. Stones were created to be hewn and made into castles; His Lordship therefore has a very beautiful castle: the greatest baron in the province must have the finest residence. And since pigs were made to be eaten, we eat pork all year round. Therefore, those who have maintained that all is well have been talking nonsense: they should have maintained that all is for the best." Candide listened attentively and believed innocently, for he found Lady Cunegonde extremely beautiful, although he was never bold enough to tell her so. He concluded that, after the good fortune of having been born Baron Thunder-ten-tronckh, the second greatest good fortune was to be Lady Cunegonde; the third, to see her every day; and the fourth, to listen to Dr. Pangloss, the greatest philosopher in the province, and therefore in the whole world. One day as Cunegonde was walking near the castle in the little wood known as "the park," she saw Dr. Pangloss in the bushes, giving a lesson in experimental physics to her mother's chambermaid, a very pretty and docile little brunette. Since Lady Cunegonde was deeply interested in the sciences, she breathlessly observed the repeated experiments that were performed before her eyes. She clearly saw the doctor's sufficient reason, and the operation of cause and effect. She then returned home, agitated and thoughtful, reflecting that she might be young Candide's sufficient reason, and he hers. On her way back to the castle she met Candide. She blushed, and so did he. She greeted him in a faltering voice, and he spoke to her without knowing what he was saying. The next day, as they were leaving the table after dinner, Cunegonde and Candide found themselves behind a screen. She dropped her handkerchief, he picked it up; she innocently took his hand, and he innocently kissed hers with extraordinaVoltaire, Francois is the author of 'Candide ', published 1984 under ISBN 9780553211665 and ISBN 0553211668.