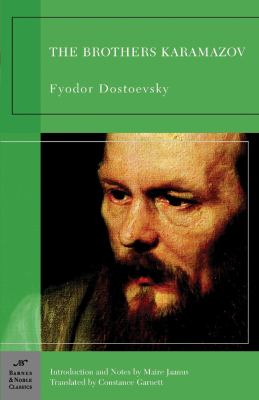 From Maire Jaanus's Introduction toThe Brothers Karamazov Dostoevsky's characters are concerned with infinitude. They refuse to live without infinitude or without a Hamlet-like concern with the eternal questions. A maddening lack of satisfaction sustains desire in this novel--sexual desire, intellectual desire, and spiritual desire, along with all the more mundane desires for money and power. And all these desires are blocked by impossibility, by the finite. One can choose to live only in the finite, but then, according to Kierkegaard and Dostoevsky, one is in despair. To find joy, one has at that boundary of the finite to choose belief and love. Even a fragmented and muddled being like Dmitri understands that although mankind is conflicted because of too many choices between good and evil, and too broad-- "Yes, man is broad, too broad, indeed. I'd have him narrower"--if you whittle him down you lose freedom and ethical accountability, and Dmitri's major question concerns ethics. "What is ethics?" he asks, and what is the right thing for me to do? If you reduce the human being, you also lose desire and love. Then you create the hell that is "the suffering of being unable to love," to connect, to reach for the impossible. Modern bureaucratization and technologization aggravate the rupture between us and infinity. This infinity that it was still possible to grasp through religion or philosophy in Dostoevsky's era is today only maintained by psychoanalysis via the passions, via that which is bodily and seemingly a product of the body and yet not bodily: that is, via the body's demand for its own beyond. Thus now we can grasp infinity only by a transcendence of our sexual reality toward death or toward love. It is the transcendence that Dmitri is at the end striving for with Grushenka. He feels perturbed and changed by his affective experience with her. She has become for him the unexpected event, an encounter with a love that is beyond phallic sexuality. Dostoevsky does not consider the questions of ethics, epistemology, and subjectivity without considering their founding in the passions, in human desire and fantasies and their attendant modes of enjoyment. He also knows that paradoxically our enjoyment can be a resistance to joy, a desire for unhappiness. Thus Dmitri has said, "There's no living without joy," but Dostoevsky puts Lisa into the novel to contradict him: She says, "I don't want to be happy." The conscious, commonsense idea that everyone wants to be happy becomes thereby more thorny and complex, as does everything having to do with the human passions in Dostoevsky. It was Marx who investigated the grounding of culture in economic labor, work, and production, and similarly it is Dostoevsky who investigates the grounding of the thinking and speaking subject in the work, movement, and productions of the emotions and the passions. The Brothers Karamazovenergizes and taxes the intellect; it calls on the reader to think about and to answer the "eternal questions": What is human happiness? Is there a God? What is despair (or Hell)? What is a father? What is the law and how should it operate? When does one forgive? Why is there cruelty? What is ethics? Why do we suffer? How can we face and comfort each other over death and loss? It is because he asks the eternal questions that Dostoevsky is above all a humanist, someone deeply interested in the possibilities and limits of the human condition, someone who wonders where we are going, what our purpose is. The humanist reminds us of the needs and dimensions of the human, what Dostoevsky calls mankind's broadness. We have no boundaries; we bring into the world a sense of something beyond anythiDostoyevsky, Fyodor is the author of 'Brothers Karamazov', published 2004 under ISBN 9781593080457 and ISBN 159308045X.