Brethren Inside The Supreme Court 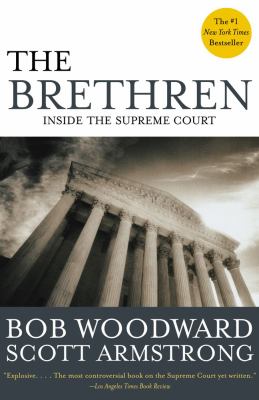 Prologue Earl Warren, the Chief Justice of the United States, hailed the elevator operator as if he were campaigning, stepped in and rode to the basement of the Supreme Court Building, where the Court limousine was waiting. Warren easily guided his bulky, 6-foot-1-inch, 220-pound frame into the back seat. Though he was seventy-seven, the Chief still had great stamina and resilience.Four young men got into the car with him that fine November Saturday in 1968. They were his clerks, recent law graduates, who for one year were his confidential assistants, ghost writers, extra sons and intimates. They knew the "Warren Era" was about to end. As Chief Justice for fifteen years, Warren had led a judicial revolution that reshaped many social and political relationships in Amer-ica. The Warren Court had often plunged the country into bitter controversy as it decreed an end to publicly supported racial discrimination, banned prayer in the public schools, and extended constitutional guarantees to blacks, poor people, Communists, and those who were questioned, arrested or charged by the police. Warren's clerks revered him as a symbol, the spirit of much that had happened. The former crusading prosecutor, three-term governor of California, and Republican vice-presidential nominee had had, as Chief Justice, a greater impact on the country than most Presidents.The clerks loved their jobs. The way things worked in the Chief's chambers gave them tremendous influence. Warren told them how he wanted the cases to come out. But the legal research and the drafting of Court opinions -- even those that had made Warren and his Court famous and infamous -- were their domain. Warren was not an abstract thinker, nor was he a gifted scholar. He was more interested in the basic fairness of decisions than the legal rationales.They headed west, downtown, turned into 16th Street and pulled into the circular driveway of the University Club, a private eating and athletic club next to the Soviet Embassy, four blocks north of the White House. The staff was expecting them. This was a Saturday ritual. Warren was comfortable here. His clerks were less so. They never asked him how he could belong to a club that had no black members.With his clerks in tow, Warren bounded up the thick-carpeted steps to the grill. It was early for lunch, not yet noon, and the room was empty. Warren liked to start promptly so they would have time for drinks and lunch before the football game. They sat in wooden captain's chairs at a table near the television and ordered drinks. The Chief had his usual gimlet. He was pensive. They ordered another round. Warren reminisced, told political stories, chatted about sports, and then turned to the recent past, to Richard Nixon's election. The Chief thought it was a catastrophe for the country. He could find no redeeming qualities in his fellow California Republican. Nixon was weak, indirect, awkward and double-dealing, and frequently mean-spirited. Throughout the 1968 presidential campaign, Nixon had run against Warren and his Court as much as he had run against his Democratic rival, Senator Hubert Humphrey. Playing on prejudice and rage, particularly in the South, Nixon had promised that his appointees to the Supreme Court would be different.It was unlikely that a Nixon Court would reverse all the Warren Court's decisions. Though Justices John Harlan, Potter Stewart and Byron White had dissented from some of the famous Warren decisions, each of them had strong reservations on the matter of the Court's reversing itself. They believed firmly in the doctrine of stare decisis -- the principle that precedent governs, that the Court is a continuing body making law that does not change abruptly merely because Justices are replaced.But as Warren and his clerks moved to lunch, the Chief expressed his frustration and his foreboding about a Nixon presidency. Earlier that year, beforeWoodward, Bob is the author of 'Brethren Inside The Supreme Court', published 2005 under ISBN 9780743274029 and ISBN 0743274024.