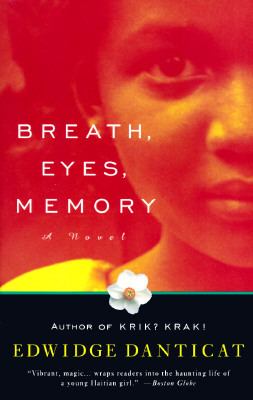 Chapter 1 A flattened and drying daffodil was dangling off the little card that I had made my aunt Atie for Mother's Day. I pressed my palm over the flower and squashed it against the plain beige cardboard. When I turned the corner near the house, I saw her sitting in an old rocker in the yard, staring at a group of children crushing dried yellow leaves into the ground. The leaves had been left in the sun to dry. They would be burned that night at the konbit potluck dinner. I put the card back in my pocket before I got to the yard. When Tante Atie saw me, she raised the piece of white cloth she was embroidering and waved it at me. When I stood in front of her, she opened her arms just wide enough for my body to fit into them. "How was school?" she asked, with a big smile. She bent down and kissed my forehead, then pulled me down onto her lap. "School was all right," I said. "I like everything but those reading classes they let parents come to in the afternoon. Everybody's parents come except you. I never have anyone to read with, so Monsieur Augustin always pairs me off with an old lady who wants to learn her letters, but does not have children at the school." "I do not want a pack of children teaching me how to read," she said. "The young should learn from the old. Not the other way. Besides, I have to rest my back when you have your class. I have work." A blush of embarrassment rose to her brown cheeks. "At one time, I would have given anything to be in school. But not at my age. My time is gone. Cooking and cleaning, looking after others, that's my school now. That schoolhouse is your school. Cutting cane was the only thing for a young one to do when I was your age. That is why I never want to hear you complain about your school." She adjusted a pink head rag wrapped tightly around her head and dashed off a quick smile revealing two missing side teeth. "As long as you do not have to work in the fields, it does not matter that I will never learn to read that ragged old Bible under my pillow." Whenever she was sad, Tante Atie would talk about the sugar cane fields, where she and my mother practically lived when they were children. They saw people die there from sunstroke every day. Tante Atie said that, one day while they were all working together, her father-my grandfather-stopped to wipe his forehead, leaned forward, and died. My grandmother took the body in her arms and tried to scream the life back into it. They all kept screaming and hollering, as my grandmother's tears bathed the corpse's face. Nothing would bring my grandfather back. The b'l?t man was coming up the road. He was tall and yellow like an amber roach. The children across the road lined up by the fence to watch him, clutching one another as he whistled and strolled past them. This albino, whose name was Chabin, was the biggest lottery agent in the village. He was thought to have certain gifts that had nothing to do with the lottery, but which Tante Atie believed put the spirits on his side. For example, if anyone was chasing him, he could turn into a snake with one flip of his tongue. Sometimes, he could see the future by looking into your eyes, unless you closed your soul to him by thinking of a religious song and prayer while in his presence. I could tell that Tante Atie was thinking of one of her favorite verses as he approached. Death is the shepherd of man and in the final dawn, good will be the master of evil. "Honneur, mes belles, Atie, Sophie." Chabin winked at us from the front gate. He had no eyelashes-or seemed to have none. His eyebrows were tawny and fine like corn silk, but he had a thick head of dirty red hair. "How are you today?" he asked. "Today, we are fine," Tante Atie said. "We do not know about tomorrow." "Danticat, Edwidge is the author of 'Breath,eyes,memory' with ISBN 9780679756613 and ISBN 0679756612.