Breath Of Snow And Ashes 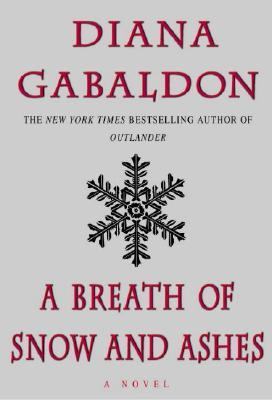 Chapter One An Interrupted Conversation The dog sensed them first. Dark as it was, Ian Murray felt rather than saw Rollo's head lift suddenly near his thigh, ears pricking. He put a hand on the dog's neck, and felt the hair there ridged with warning. So attuned as they were to each other, he did not even think consciously, "Men," but put his other hand to his knife and lay still, breathing. Listening. The forest was quiet. It was hours 'til dawn and the air was still as that in a church, with a mist like incense rising slowly up from the ground. He had lain down to rest on the fallen trunk of a giant tulip tree, preferring the tickle of wood-lice to seeping damp. He kept his hand on the dog, waiting. Rollo was growling, a low, constant rumble that Ian could barely hear but felt easily, the vibration of it traveling up his arm, arousing all the nerves of his body. He hadn't been asleephe rarely slept at night anymorebut had been quiet, looking up into the vault of the sky, engrossed in his usual argument with God. Quietness had vanished with Rollo's movement. He sat up slowly, swinging his legs over the side of the half-rotted log, heart beating fast now. Rollo's warning hadn't changed, but the great head swiveled, following something unseen. It was a moonless night; Ian could see the faint silhouettes of trees and the moving shadows of the night, but nothing more. Then he heard them. Sounds of passage. A good distance away, but coming nearer by the moment. He stood and stepped softly into the pool of black under a balsam fir. A click of the tongue, and Rollo left off his growling and followed, silent as the wolf who had been his father. Ian's resting-place overlooked a game trail. The men who followed it were not hunting. White men. Now that was odd, and more than odd. He couldn't see them, but didn't need to; the noise they made was unmistakable. Indians traveling were not silent, and many of the Highlanders he lived among could move like ghosts in the woodbut he had no doubt whatever. Metal, that was it. He was hearing the jingle of harness, the clink of buttons and bucklesand gun barrels. A lot of them. So close, he began to smell them. He leaned forward a little, eyes closed, the better to snuff up what clue he could.They carried pelts; now he picked up the dried-blood cold-fur smell that had probably waked Rollobut not trappers, surely; too many. Trappers moved in ones and twos.Poor men, and dirty. Not trappers, and not hunters. Game was easy to come by at this season, but they smelled of hunger. And the sweat of bad drink. Close by now, perhaps ten feet from the place where he stood. Rollo made a tiny snorting sound, and Ian closed his hand once more on the dog's ruff, but the men made too much noise to hear it. He counted the passing footsteps, the bumping of canteens and bullet boxes, foot-sore grunts and sighs of weariness. Twenty-three men, he made it, and there was a muleno, two mules with them; he could hear the creak of laden panniers and that querulous heavy breathing, the way a loaded mule did, always on the verge of complaint. The men would never have detected them, but some freak of the air bore Rollo's scent to the mules. A deafening bray shattered the dark, and the forest erupted in front of him with a clishmaclaver of crashing and startled shouts. Ian was already running when pistol shots crashed behind him. "A Dhia!" Something struck him in the head and he fell headlong. Was he killed? No. Rollo was pushing a worried wet nose into his ear. His head buzzed like a hive and he saw bright flashes of light before his eyes. &Gabaldon, Diana is the author of 'Breath Of Snow And Ashes ', published 2005 under ISBN 9780385324168 and ISBN 0385324162.