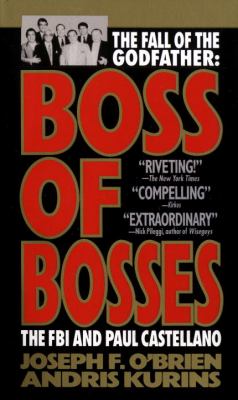 Introduction On December 16, 1985, at approximately five forty-five in the evening, Paul Castellano, the most powerful gangster in America -- the Mafia's Boss of Bosses -- was gunned down on a busy Manhattan street, along with his driver, bodyguard, and underboss, Thomas Bilotti. The rubout was a classic instance of how the Mob deals with difficult questions of succession, and with qualms about internal security. Castellano had been at the top of the Mafia pyramid for nine years, since the 1976 death of his cousin and brother-in-law, Carlo Gambino. His reign had been a time of prosperity and relative stability for New York racketeers. But now Big Paul was seventy years old, and had diabetes, high blood pressure, and heart trouble. Unprecedented legal pressures were being brought to bear on him. He was a man beset, and he was tired; according to some, his grip on reality was loosening. Some of his associates hated him, and he knew it. Being hated was not in itself a problem. It went with the job. Being hated without being feared, however, was dangerous, and Castellano was coming to realize that some of his young lieutenants -- most especially the cocky and ambitious John Gotti -- no longer feared him. Or rather, they feared not his strength but his possible weakening. At the time of his death, Paul Castellano was on trial for running a stolen car ring and conspiring to commit murder. These charges, while serious enough, said less about the full gamut of Castellano's crimes than about the government's subtle and painstaking strategy of building cases against him piece by piece, one by one. He had already been indicted, arrested, and freed on bail in the famous Commission case, which would come to trial in 1986, and would essentially dismantle the Mob's entire leadership structure. The even more personally damning Castaway case, stemming from the bugging of Castellano's residence, was also being readied. The bottom line was that, win or lose, Big Paul would be in and out of court for years, and this made his underlings very nervous. Unlike younger Mafiosi, whose mettle was proved and whose careers were sometimes made by an early show of loyalty and defiance that led to a conviction for contempt of court or obstruction of justice, Castellano had nothing to gain from a prison term. At seventy, the idea is not to impress but to survive. Castellano didn't want to be away from his doctors, from his supply of insulin and heart pills. He didn't want to be away from the gaudy comforts of his Staten Island mansion. He didn't want to be away from his mistress, who happened also to be his, and his wife's, Colombian maid. For all those reasons, it was feared that Big Paul might sing. And to those who might be implicated in what Paul Castellano had to sing about, killing him seemed less trouble than enduring the worry and the sleepless nights that would attend his private confabulations with the authorities. So the hit was arranged. It was to be a highly public act -- no Hoffa-like disappearing routine -- and this, in the language of the Mob, sent a message: The murder was not a rebellion by some splinter faction of the Gambino clan, but a stratagem sanctioned by the five major Cosa Nostra families of New York. As in some primitive ritual, all members of the tribe would acknowledge, accept, and share responsibility for the slaying of the patriarch; they would all, so to speak, eat a piece of Paul. Telling, too, was the fact that the killing took place uptown. Old-style Godfathers, when their time was up, tended to be eliminated in the linguine joints of Little Italy. They landed facedown in the clam sauce, their blood blended with the red-and-white-checked tablecloths, and the bullet holes in the walls behind them became tourist attractions. But Paul Castellano, who fancied himself a savvy and thoroughly American businessman, and who imagined that he was guiding the Mob intO'Brien, Joseph F. is the author of 'Boss of Bosses The Fall of the Godfather The FBI and Paul Castellano' with ISBN 9780440212294 and ISBN 0440212294.