Boot Hill An Anthology of the West 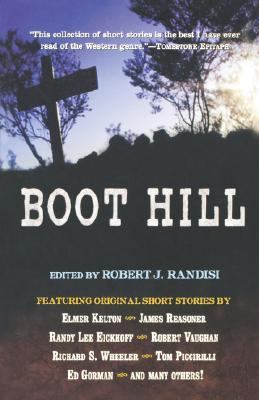 THE GRAVEDIGGER Robert J. Randisi Don't never sneak up on a feller when he's diggin' a grave! Sorry, but ya gave me a fright, there. They call me the Gravedigger. Welcome to Boot Hill. Reckon you're a-wonderin' what all the fuss is about, all these holes an' such. Lemme lean on my shovel here, a minute. Backbreakin' work, diggin' graves, but honest. That's what I was lookin' for when I come here in 'seventy-four. By that time Boot Hill already been here two years. Don't know 'zackly why they stuck it up here on this hill. Some say it was ta keep water from gettin' ta them, others so's ever'body could see it from miles around. Mebbe it's even so's the dead could have a good view. All I know is this is the highest point hereabouts. Coulda called it High Point Hill, I guess, but they called it Boot Hill 'cause so many of them that's buried here died with their boots onusually from violence. 'Course, just 'cause they was shot, or stabbed, or stabbed, or killed some other violent way don't mean they was bad. No, sir. All these dead folks got their own stories to tellif'n they could tell 'em, that is. 'Course, I reckon I could tell ya some stories, couldn't I? I need me a rest, anyways. Been expectin' some help along now, cain't be diggin' up all these graves by my lonesome. But seein' as how this here is the highest point around and I cain't see nobody comin' up ta help me yet, guess I could take a break for a spell and spin ya a yarn or two. I mean, tell ya what happened to some of these poor folks that's buried up here. Lemme jest leave my shovel here...I'll wipe off some of my sweat with my bandana...least there's a breeze up here, most times, 'cept in like July or August...now follow me and I'll show ya some of these headstones. None of them is anythin' fancy, ya understand, mostly just some words carved onto some wood we got from breakin up packin' cases an' such. When somebody's gettin' buried up here ain't usually nobody to pay for no fancy stone. 'Sides, we ain't got no stone or marble or nothin' like that ta use, an' bringin' it in from Back East would cost too much. As for the writin' on 'em, sometimes folks jes' put somethin' simple like a feller's name...don't always know when they was born, but you kin usually tell when they died, that's for sure. Other times there's folks who get downright poetical. Lesse...not that one, jes' a date and weren't nothin' interestin' about the way he died...no, not that one, neither. Don't wanna waste yer time with borin' stories, I know you got other things ta do, and I gotta get back ta work sometime...mebbe over here... Ah! Here's one. Come on, move in around this here marker. Ya see what I mean about the marker, jes' some ol' piece a wood with some writin' on it, but it's kinda pretty writin' and the story behind it's kinda, well, entertainin', I guess you'd say. As you kin see wasn't nobody sure when he was born, but he was planted here even afore I got here and I heard the story from the undertaker himself. Jes' get on close enough ta read the words yore own self and I'll tell ya whatRandisi, Robert J. is the author of 'Boot Hill An Anthology of the West' with ISBN 9780765300829 and ISBN 0765300826.

4 from $2.55
Loading marketplace prices 4 copies from $2.55 How does the rental process work?
View more