Black Titan A.G. Gaston and the Making of a Black American Millionaire 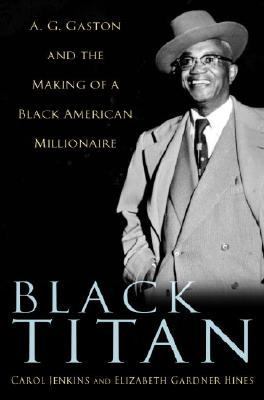 Chaper 1 MARENGO COUNTY What I did any man can do-if he has willpower, determination and a plan. The Iron Mines Pick any sweltering day in the year 1919. On the outskirts of Birmingham, Alabama, in a small mining village, hundreds of black men are at work, side by side. The old-fashioned broiler that is the Alabama sun beats down hard upon them, and to a man, each is afloat in his own sweat. In the ground beneath their feet, men less lucky than they swim in the blackness of the pits. Thousands of pounds of iron will emerge as a result of their labor; and thousands of men will die in its pursuit. Some of the men you see and cannot see are convicts, leased out by the state to bring in revenues; some are war veterans, newly returned to face few opportunities and ample disdain. Nevertheless, one of these men, bruised like all the others by the demands of his working life, is on the verge of taking his first step in the direction of becoming a bona fide millionaire-one hundred times over. Before this man is through, he will serve as an adviser to President John Kennedy. He will play a pivotal role in the American civil rights movement. One day he will even be likened to the great giants of American industry-Rockefeller, Morgan, and Carnegie among them. Like just about every other black man in Alabama in the early part of the twentieth century, A. G. Gaston started with next to nothing: His mother was a cook in the kitchen of a prominent white family; he never had more than a tenth-grade education. After the war he had taken his position in the mines as a means of survival-only to emerge utterly determined that his life was worth more than what the mines were offering. That determination was a kind of miracle given the context in which Gaston had been raised. And that miracle is the foundation of the story you are about to hear. The Olive and Vine Company In order to appreciate A. G. Gaston and his extraordinary success against all odds, we must first understand the world as he knew it. Gaston was born in the tiny, western Alabama town of Demopolis. Situated halfway between Montgomery, Alabama, and Jackson, Mississippi, Demopolis boasts a long and infamous history. The town is located at the confluence of the Tombigbee and Black Warrior Rivers, used as water highways by Native peoples, early explorers, traders, and settlers. Lodged within the geographic triangle of Tuscaloosa to the north, Mobile to the south, and Montgomery to the east, Demopolis sits dead center in what came to be known as the Black Belt of southern agriculture-as much for the darkness of the soil as for the color of the people who tended it. President Andrew Jackson, who would launch a meticulous removal of Native American inhabitants from their lands during his administration, had actually started his sweep years before as a militiaman. In the case of Demopolis and its environs, it was the Choctaws who were forced to relocate in 1816. The following year the land was granted by the U.S. Congress to a group of aristocratic exiles who had been banished from France after the revolution for their allegiance to France's fallen dictator Napoleon Bonaparte. The exiles named their new home Demopolis-"city of the people"-and re-created there a French village called Aingleville. They had come with the intention of coaxing groves of olives and grapes from the region's fertile soil, founding the Olive and Vine Colony toward this end. However, the combination of unsuitable growing conditions for their preferred crops and the inexperience on the part of the settlers resulted in a magnificent failure in production. According to legend, the exiles were comically unprepared for rural life; men and women alike were said to tend to their farming duties in full court attire. Not a few of the exiles quickly succumbed to the harshness of the agriculJenkins, Carol is the author of 'Black Titan A.G. Gaston and the Making of a Black American Millionaire', published 2004 under ISBN 9780345453471 and ISBN 0345453476.