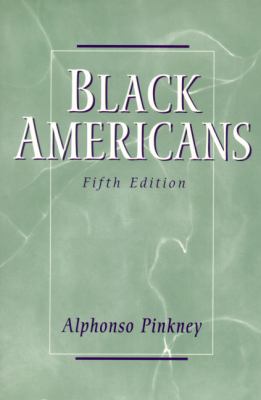 Preface When this book was first published in 1969, African-Americans faced a serious crisis arising from the assassination of Martin Luther King, Jr. Angered by this act, blacks took to the streets in cities around the country, demonstrating their outrage by massive acts of property destruction. In general, white individuals and institutions responded to the tragedy of the assassination by attempting to make some amends for past injustices. Colleges and universities recruited black students in greater numbers than ever before, and programs of African-American and African studies were organized on a wide scale. It appeared that equality for blacks had finally become an issue of critical importance. However, by the time the second edition appeared in 1975, little change in the status of African-American people relative to that of white people had come about, but many changes in the mind and mood of African-American people had occurred, mainly in the ascendancy of nationalist sentiment in the black community. Black nationalist organizations thrived until the Federal Bureau of Investigation and other government agencies commenced a systematic campaign to destroy this movement. Because of this campaign and the inevitable internal dissension within these organizations, the movement virtually collapsed. Nevertheless, with the advent of affirmative action, some progress was made in the status of African-Americans in the United States. For a brief time there was an official commitment to racial equality. With the third edition in 1987, the mood of the country had changed, and conservatism had become the dominant ethos of American politics and of the country as a whole. The right-wing administration of Ronald Reagan and the egocentricity of the American people combined to mount a serious attack on compensatory justice. They were joined in this effort by black conservatives who opposed affirmative action and other measures to improve the lot of African-Americans, insisting that blacks must rely on individual initiative and self-help rather than government assistance. These forces succeeded in reversing some of the gains that African-Americans and others had made through intensive struggle. The fourth edition in 1993 found African-Americans facing additional challenges of major proportions: acquired immune deficiency syndrome (AIDS), adolescent pregnancy and childbearing, crack cocaine and other substance abuse, homelessness, and widespread homicide, among others. By promoting and condoning racial oppression through the years, the government must bear major responsibility for the impact of these problems on African-Americans. In this, the fifth edition of the book, it should be noted that there has been little, if any, change in the problems enumerated in the fourth edition. In addition, there has been an intensified effort to end affirmative action, thereby impeding an important avenue to black progress. Because of this, a chapter on the subject has been added, along with some other changes, including a chapter on crime and justice. Although this book is a sociological study of African-Americans, it addresses the general reader as well as the professional student of society. It is hoped that sociological perspective and analysis have not been sacrificed. I would like to thank the following reviewers for their helpful suggestions: Darnell F. Hawkins, University of Illinois at Chicago; and Robert L. Carter, Hunter College, CUNY. Several people assisted in preparing this edition, including my editor, Sharon Chambliss, and my production editor, Rob DeGeorge, at Prentice Hall; and Mark Schwartz and Denise Garland of the U.S. Department of Education. I am grateful to them for their contributions to whatever virtues this edition may have, but its shortcomings are mine alone. Alphonso PinkneyPinkney, Alphonso is the author of 'Black Americans', published 1999 under ISBN 9780130825773 and ISBN 0130825778.