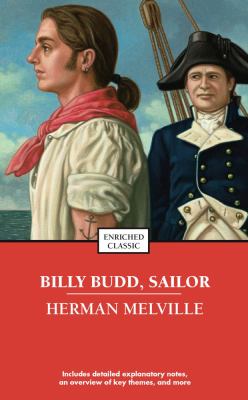 Chapter One In the time before steamships, or then more frequently than now, a stroller along the docks of any considerable seaport would occasionally have his attention arrested by a group of bronzed mariners, man-of-war's men or merchant sailors in holiday attire, ashore on liberty. In certain instances they would flank, or like a bodyguard quite surround, some superior figure of their own class, moving along with them like Aldebaran among the lesser lights of his constellation. That signal object was the "Handsome Sailor" of the less prosaic time alike of the military and merchant navies. With no perceptible trace of the vainglorious about him, rather with the offhand unaffectedness of natural regality, he seemed to accept the spontaneous homage of his shipmates.A somewhat remarkable instance recurs to me. In Liverpool, now half a century ago, I saw under the shadow of the great dingy street-wall of Prince's Dock (an obstruction long since removed) a common sailor so intensely black that he must needs have been a native African of the unadulterate blood of Ham -- a symmetric figure much above the average height. The two ends of a gay silk handkerchief thrown loose about the neck danced upon the displayed ebony of his chest, in his ears were big hoops of gold, and a Highland bonnet with a tartan band set off his shapely head. It was a hot noon in July; and his face, lustrous with perspiration, beamed with barbaric good humor. In jovial sallies right and left, his white teeth flashing into view, he rollicked along, the center of a company of his shipmates. These were made up of such an assortment of tribes and complexions as would have well fitted them to be marched up by Anacharsis Cloots before the bar of the first French Assembly as Representatives of the Human Race. At each spontaneous tribute rendered by the wayfarers to this black pagod of a fellow -- the tribute of a pause and stare, and less frequently an exclamation -- the motley retinue showed that they took that sort of pride in the evoker of it which the Assyrian priests doubtless showed for their grand sculptured Bull when the faithful prostrated themselves.To return. If in some cases a bit of a nautical Murat in setting forth his person ashore, the Handsome Sailor of the period in question evinced nothing of the dandified Billy-be-Dam, an amusing character all but extinct now, but occasionally to be encountered, and in a form yet more amusing than the original, at the tiller of the boats on the tempestuous Erie Canal or, more likely, vaporing in the groggeries along the towpath. Invariably a proficient in his perilous calling, he was also more or less of a mighty boxer or wrestler. It was strength and beauty. Tales of his prowess were recited. Ashore he was the champion; afloat the spokesman; on every suitable occasion always foremost. Close-reefing topsails in a gale, there he was, astride the weather yardarm-end, foot in the Flemish horse as stirrup, both hands tugging at the earing as at a bridle, in very much the attitude of young Alexander curbing the fiery Bucephalus. A superb figure, tossed up as by the horns of Taurus against the thunderous sky, cheerily hallooing, to the strenuous file along the spar.The moral nature was seldom out of keeping with the physical make. Indeed, except as toned by the former, the comeliness and power, always attractive in masculine conjunction, hardly could have drawn the sort of honest homage the Handsome Sailor in some examples received from his less gifted associates.Such a cynosure, at least in aspect, and something such too in nature, though with important variations made apparent as the story proceeds, was welkin-eyed Billy Budd -- or Baby Budd, as more familiarly, under circumstances hereafter to be given, he at last came to be called -- aged twenty-one, a foretopman of the British fleet toward the close of the last decade of the eighteenth century. It waMelville, Herman is the author of 'Billy Budd, Sailor', published 2006 under ISBN 9781416523727 and ISBN 1416523723.