Beyond Atkins A Healthier, More Balanced Approach to a Low Carbohydrate Way of Eating 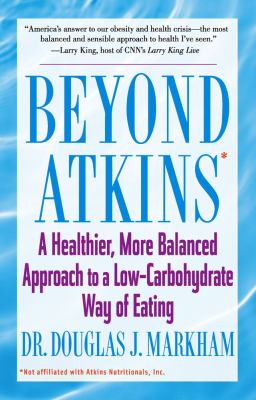 Preface The idea behind the Total Health program is that you have the absolute right to health and happiness. You work hard to provide for yourself and your loved ones. Compromise and sacrifice are part of life. Unfortunately, it's all too easy to compromise your physical and mental health along the way.And that's a crime. Because if you've sacrificed your health, you'll end up spending your hard-earned resources on medical bills, trying to counteract a lifetime of poor health choices. It's hard to enjoy the fruits of your labor when the lifestyle you've worked so hard to achieve is limited by deteriorated health.The Total Health program has inspired and enlightened individuals to achieve optimum health and wellness by combining a protein-rich, favorable-carbohydrate way of eating with regular physical exercise, intellectual development, and spiritual growth.Thousands of people have participated in the Total Health program, with many of them no longer needing prescription medications for diseases such as high blood pressure, high cholesterol, and adult-onset diabetes.It's my sincere belief that everyone has the absolute right to be both healthy and happy. People just need the right tools to help empower them to effect change.In July 2002, John Schneider and I appeared together on CNN's Larry King Live, where John shared his struggle with childhood obesity for the first time on national television. There I announced my plans to depart on my HEALTH Across America Tour, part of a national public education campaign on the prevention of obesity-related diseases. This tour will eventually take me to America's twenty-five "fattest" cities, as ranked by Men's Fitness magazine.At age 16, with a 44-inch waist, a height of six feet, three inches, and weighing just under 250 pounds, John heeded the advice of his brother and began making lifestyle changes. Two years and 50 pounds later, John's acting career took him to the top when he was cast as heartthrob Bo Duke on television's The Dukes of Hazzard. John currently stars on the WB hit television series Smallville and subscribes to the Total Health weight loss and wellness management philosophy.The idea for an expanded version of my first book, Total Health, resulted from the overwhelming response to John's inspirational story and my continued commitment to fighting childhood and adult obesity. The goal of this book is to enlighten the world with a simple, safe, and effective answer to gaining control of your weight loss, wellness, and fitness goals.The solution to our present health and obesity epidemic will require effective collaboration among government, volunteer organizations (the American Heart Association, PTAs, etc.), and the private sector (media, TV, radio, print, etc.), as well as a commitment to action by parents, individuals, and communities to provide a simple approach through proper education, implementation, and follow-up.Remember, it's your absolute right to be healthy and happy! It's my sincere and deepest desire that this book and the Total Health program helps you take your first steps toward taking control of your health and creating a lifetime of health and happiness!Yours in Total Health,Dr. DougP.S. Even though the Total Health program is a much more balanced approach to a low-carbohydrate way of eating, I must give thanks to the pioneers of protein-based diets -- people such as Dr. Stillman, Dr. Atkins, and others, who, despite the ridicule of their peers and the nutritional establishment, remained true to their beliefs. They were always on the right track, but their approaches were just not well balanced enough for a long-term health approach. Copyright 2004, 2005 by Douglas J. Markham, D.C.Markham, Douglas J. is the author of 'Beyond Atkins A Healthier, More Balanced Approach to a Low Carbohydrate Way of Eating', published 2005 under ISBN 9781416503552 and ISBN 1416503552.