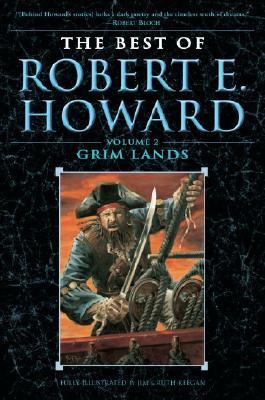 By This Axe I Rule! I "My Songs Are Nails for a King's Coffin!" "At midnight the king must die!" The speaker was tall, lean and dark, and a crooked scar close to his mouth lent him an unusually sinister cast of countenance. His hearers nodded, their eyes glinting. There were four of these one was a short fat man, with a timid face, weak mouth and eyes which bulged in an air of perpetual curiosity another a great somber giant, hairy and primitive the third a tall, wiry man in the garb of a jester whose flaming blue eyes flared with a light not wholly sane and last a stocky dwarf of a man, inhumanly short and abnormally broad of shoulders and long of arms. The first speaker smiled in a wintry sort of manner. "Let us take the vow, the oath that may not be broken the Oath of the Dagger and the Flame. I trust you oh, yes, of course. Still, it is better that there be assurance for all of us. I note tremors among some of you." "That is all very well for you to say, Ascalante," broke in the short fat man. "You are an ostracized outlaw, anyway, with a price on your head you have all to gain and nothing to lose, whereas we " "Have much to lose and more to gain," answered the outlaw imperturbably. "You called me down out of my mountain fastnesses to aid you in overthrowing a king I have made the plans, set the snare, baited the trap and stand ready to destroy the prey but I must be sure of your support. Will you swear?" "Enough of this foolishness!" cried the man with the blazing eyes. "Aye, we will swear this dawn and tonight we will dance down a king! 'Oh, the chant of the chariots and the whir of the wings of the vultures ' " "Save your songs for another time, Ridondo," laughed Ascalante. "This is a time for daggers, not rhymes." "My songs are nails for a king's coffin!" cried the minstrel, whipping out a long lean dagger. "Varlets, bring hither a candle! I shall be first to swear the oath!" A silent and sombre slave brought a long taper and Ridondo pricked his wrist, bringing blood. One by one the other four followed his example, holding their wounded wrists carefully so that the blood should not drip yet. Then gripping hands in a sort of circle, with the lighted candle in the center, they turned their wrists so that the blood drops fell upon it. While it hissed and sizzled, they repeated: "I, Ascalante, a landless man, swear the deed spoken and the silence covenanted, by the oath unbreakable!" "And I, Ridondo, first minstrel of Valusia's courts!" cried the minstrel. "And I, Volmana, count of Karaban," spoke the dwarf. "And I, Gromel, commander of the Black Legion," rumbled the giant. "And I, Kaanuub, baron of Blaal," quavered the short fat man, in a rather tremulous falsetto. The candle sputtered and went out, quenched by the ruby drops which fell upon it. "So fade the life of our enemy," said Ascalante, releasing his comrades' hands. He looked on them with carefully veiled contempt. The outlaw knew that oaths may be broken, even "unbreakable" ones, but he knew also that Kaanuub, of whom he was most distrustful, was superstitious. There was no use overlooking any safe guard, no matter how slight. "Tomorrow," said Ascalante abruptly, "I mean today, for it is dawn now, Brule the Spear-slayer, thHoward, Robert E. is the author of 'Best of Robert E. Howard The Shadow Kingdom', published 2007 under ISBN 9780345490193 and ISBN 0345490193.