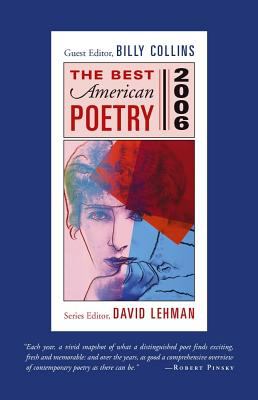 Foreword by David Lehman Back in 1992, when he made his first appearance inThe Best American Poetry, Billy Collins was a little-known, hardworking poet who had won a National Poetry Series contest judged by Edward Hirsch. He had supported himself for many years by teaching English and was, like many other poets, looking for a publisher. Charles Simic chose "Nostalgia" fromThe Georgia ReviewforThe Best American Poetry 1992and for the following year'sBest, Louise Gluck selected "Tuesday, June 4th, 1991" fromPoetry. Others, too, recognized Collins's talent. The University of Pittsburgh Press began to publish his books in its estimable series directed by Ed Ochester. Radio host Garrison Keillor gave Collins perhaps the biggest boost of all by asking him to read his poems on the air. He did, and the audience loved what it heard. Collins grew popular. At the same time, it was understood that he was no less serious for having the common touch. Asked to explain his poetic lineage, he liked citing Coleridge's "conversation" poems, such as "This Lime-Tree Bower My Prison." And for all their genial whimsy, many of Collins's efforts have a decidedly literary flavor, with such subjects as "Tintern Abbey," Emily Dickinson,The Norton Anthology of English Literature, poetry readings, writing workshops, "Keats's handwriting," and Auden's "Musee des Beaux Arts." John Updike put it exactly when he described Collins's poems as "limpid, gently and consistently startling, more serious than they seem." In 2000, two publishers quarreled publicly over the rights to publish Collins's books, and theNew York Timesreported the story on page one. The unlikely success story reached its apogee a year after September 11, 2001, when Billy Collins read "The Names," a poem he had written for the somber occasion, to a rare joint session of Congress. By then Collins had become a phenomenon. While remaining a member in good standing of the poetry guild, an entity with a purely notional existence whose members would theoretically starve for their art, he had regular contact with honest-to-goodness book-buying readers who were not themselves practicing poets. They numbered in the tens of thousands and made best-sellers of his books. He won a Guggenheim Fellowship and a grant from the National Endowment for the Arts. His poems were published in respected journals such asThe AtlanticandPoetryand were chosen by the diverse quartet of John Hollander, Robert Bly, Rita Dove, and Robert Hass for four consecutive volumes ofThe Best American Poetry. In June 2001, Collins succeeded Stanley Kunitz as Poet Laureate of the United States, and I remember hearing people gripe about the appointment. Collins was regularly dismissed as an "easy" or "anecdotal" poet. It was then that I knew he had made it big. Harold Bloom has propounded the theory that poets fight Oedipal battles with ancestors of their choice, so that Wallace Stevens had to overcome Keats's influence as Wordsworth had earlier overcome Milton's. It sometimes seems to me that a different Freudian paradigm -- sibling rivalry -- may explain the behavior of contemporary poets, for the backbiting in our community is ferocious, and nothing signifies success better than ritual bad-mouthing by rivals or wannabes. The story as I've sketched it broadly here illustrates more than one useful lesson. Probably the most important is that poetry has the potential to reach masses of people who read for pleasure, still and always the best reason for reading. Radio is a great resource for spreading the word, and attention from programs such as Keillor'sWriter's Almanac, Terry Gross'sFresh Air, and the interview shows of Leonard Lopate in New York City and Michael Silverblatt in Los AngeCollins, Billy is the author of 'Best American Poetry 2006 ', published 2006 under ISBN 9780743257596 and ISBN 0743257596.