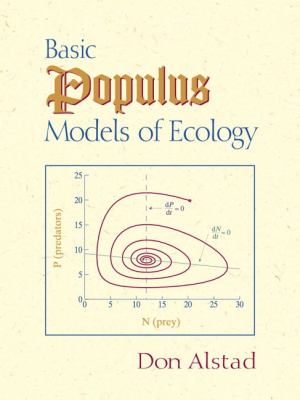 Preface Population biology is a quantitative science dealing with changes in the size and composition of populations, and population biologists often use mathematical models to infer population dynamics. These models use information about the properties of individuals and basic assumptions about their interactions to predict population size, gene frequency, and optimal behavioral strategies of individuals, forming an important conceptual framework for courses in ecology, evolution, and behavior. Students bring a range of quantitative backgrounds to the study of population biology. Although the models taught in introductory courses are not difficult, math anxieties and the abstract nature of the equations impede many students. ThePopulussoftware addresses this problem. Computer simulations provide a visual demonstration of model dynamics, helping students develop an intuitive connection between the form of the equations, their quantitative parameter values, and the resulting model behavior. The first rudiments ofPopuluswere produced in collaboration with my Minnesota colleagues Peter Abrams, Jim Curtsinger, and Dave Tilman, with 1986 funding from IBM, and integrated into a functional package by a superb student programmer, Chris Bratteli. We used the program at the University of Minnesota, shared it with a few friends elsewhere, and gradually improved it, supported by the National Science Foundation. In 1991, with 30Populusmodels spanning introductory courses in ecology and evolution, I began to distribute the software and to encourage gratis duplication. Chris and I continued to developPopuluswith a second programmer, Elizabeth Goehring, until 1995, when my attention turned to other interests. The penultimate DOS version ofPopulus(3.4) became widely used, and pressure to revise it escalated as microprocessors with clock speeds beyond the capacity of Borland Turbo Pascal began to cause runtime errors. Together with a third programmer, Lars Roe, I began to rebuildPopulusfor Java virtual machines in summer 1998. We also patched version 3.4 to fix the Borland runtime error, producing version 3.42 for DOS windows in Win95, Win98, and WinNT.Populus3.42 is available for download fromhttp://ecology.umn.edu/populus.The Web site also provides full instructions. The new JavaPopulus,version 5.x, is available from the same Web site,http://ecology.umn.edu/populus.This program runs as a local application (not an applet) on any platform that supports a Java Virtual Machine, including both Windows and Macintosh computers. Linked sets of input and output windows in the new interface allow toggled parameter increments to show up instantly on the appropriate graphs, so the effect of changing parameter values is immediate and clear. The current JavaPopulusversion supports all of the basic ecological models described in this book and several basic evolutionary models. We will update this posting as the new package grows to full equivalence with DOSPopulus3.42 and beyond. Minnesota ecology classes invest about a third of their lab meetings in model simulation. The remaining two thirds are devoted to experiments, foraging games, data manipulation, and role-playing discussion. Students first encounter a mathematical model in lecture after a series of empirical examples that motivate its central issues. I derive the equations and explain their significant properties before students come to the computer lab, then use simulation exercises to reinforce this initial exposure. We have found this sequence essential; students who attempt simulations without the conceptual preparation provided by a lecture or reading assignment take less away from the experience. This book should foster that conceptual preparation. It will supplement any of the mayor texts, guiding lab experience with the mathematical models of an introductory ecolAlstad, Donald is the author of 'Basic Populus Models of Ecology', published 2000 under ISBN 9780130212894 and ISBN 013021289X.