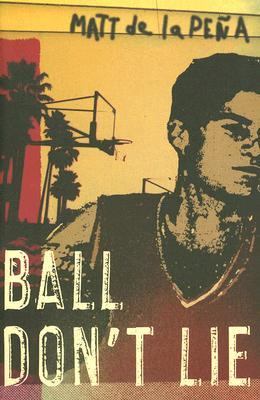 Dreadlock Man, with his fierce fists and suspect jump shot, sets his stuff ($1.45 sandals, key to bike lock, extra T-shirt) on the bleachers and holds his hands out for the ball. It's ten in the morning and Lincoln Rec has just opened. Sticky's at the free-throw line working out his routine, while all the regulars come swaggering in. Come on, little man, Dreadlock Man says. Give up the rock. Sticky throws an around-the-back, no-look dime. Watches Dreadlock Man rise into the air with his awful form--calves tightening, dreads scattering, eyes poised on the goal--and let go of a sorry-looking line drive. Before he comes back down to the dusty old hardwood, he yells out: Peanut Butter! Says it every time he takes a jumper. Peanut Butter! That's what he wants everyone to call him, but nobody does. When the ball ricochets off the side of the backboard, entirely missing the rim, he says what any man would say: Hey, yo, Stick, let me get one more. Hawk passes through the door, from sunny day into old dark gym. A big black man. Wears bright wraparound shades and baggy shorts, the new Jordans on his size-sixteen feet. Hawk has a little money to his name. He's one of the few Lincoln Rec ballers who does. Some of the regulars say he made a few movies a couple years back. A stunt double maybe or security on the set. If you look quickly, get a fast profile shot, you might think he looks like someone. Hey, yo, Dreadlock Man, he says, megaphoning a hand around his mouth. I got five says you brick that shot. The whole side of his shaved head flexes as he chews hard at his gum. Dreadlock Man takes a couple awkward dribbles and rises again. Peanut Butter! This time his ball arcs through the air without backspin. A Phil Niekro knuckleball that thuds off the back of the rim and drops into Sticky's waiting hands. Damn, Dreadlock Man, your shot's straight broke. Hawk falls into the bleachers laughing, goes to lace up his new sneaks. Other dudes come strutting into the gym. Slapping hands. Slinging their bags onto the bleachers and talking trash. Sticky high-dribbles to the other end of the court, spins in an acrobatic reverse. He points up at an invisible crowd. Dreadlock Man watches, hands on hips. Yells out: Come on, Stick, we tryin to shoot down here. A couple other balls get tossed into the rotation. Everybody shooting short set-shots to get warm, stretching out stiff shoulders and legs. Most of these cats are just out of bed. A couple have pulled themselves off a piece of cardboard on court two, having spent the night where all the homeless stay. Lincoln Rec functions both as a great place to hoop and a small-time homeless shelter. Sometimes things overlap. Sticky comes dribbling down from the other side of the court with his left hand. He goes right up to Dante, who's just walked in carrying a duffel bag, the best player in the gym, and shoots a soft twenty-footer over his outstretched hand. Dante and Sticky watch the ball smack both sides of the rim and bounce off toward the east sideline. Go get that brick, Stick, Dante says. Bring it back my way so you could watch a real shooter. Dante played ball overseas for six or seven seasons; he's slick with both the rock and his mouth. Some cats say, Watch it, man, to newcomers, dude will beat you two times. Then they sit back and clown those who brush off their warning: Told ya, dawg. Didn't I tell him, Big J, when he walked his sorry ass in here? Yeah, I heard it, OP. I was sitting right there when you said it. Dante's skin shines black as night, and his hair is scarecrow wild. The devil's growth fingers out from his chin. Sticky skips a bounce pass to Dante, who pats it around his back a little, through his legs some, close to the ground with his tips like a magician, and then fires up a twenty-five-footer that nestles in the gut of the net. You see how I play the stringsde la Pena, Matt is the author of 'Ball Don't Lie ', published 2007 under ISBN 9780385734257 and ISBN 0385734255.