Baby Whisperer Solves All Your Problems Sleeping, Feeding, And Behavior--beyond the Basics from Infancy Through Toddlerhood 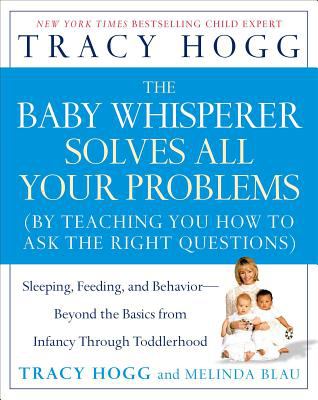 Chapter One: E.A.S.Y. Isn't Necessarily Easy (But It Works!) Getting Your Baby on a Structured RoutineThe Gift of E.A.S.Y.You probably have a routine in the morning. You get up at roughly the same time, maybe you shower first or have your coffee, or perhaps you immediately hop on the treadmill or take your pup out for a brisk walk. Whatever you do, it's probably pretty much the same every morning. If by chance something interrupts that routine, it can throw off your whole day. And I'll bet there are other routines in your day as well. You're used to having your dinnertime at a certain hour. You probably have particular rituals at the end of the day, too, like spooning with your favorite pillow (or partner!) in anticipation of a good night's sleep. But let's say your dinner hour changes or you have to sleep in a bed away from home. Isn't it unsettling and don't you feel disoriented when you wake?Naturally, people vary in their need for structure. At one end of the continuum are those whose entire days are predictable. At the other end are free spirits who tend to fly by the seat of their pants. But even "flyers" usually have some sort of dependable rituals during their day. Why? Because human beings, like most animals, thrive when they know how and when their needs are going to be met and know what's coming next. We all like some degree of certainty in our lives.Well, so do babies and young children. When a new mum brings her baby home from the hospital, I suggest a structured routine straightaway. I call it "E.A.S.Y.," an acronym that stands for a predictable sequence of events that pretty much mirrors how adults live their lives, albeit in shorter chunks:Eat, have someActivity, and go toSleep, which leaves a bit of time forYou. It isnota schedule, because you cannot fit a baby into a clock. It's a routine that gives the day structure and makes family life consistent, which is important because all of us, children and adults, as well as babies and toddlers, thrive on predictability. Everyone benefits: Baby knows what's coming next. Siblings, if there are any, get more time with Mum and Dad -- and they get to have less harried parents who have time for themselves as well.I was actuallydoingE.A.S.Y. long before I named it. When I first started caring for newborns and young babies more than twenty years ago, a structured routine just seemed to make sense. Babies need us to show them the ropes -- and to keep it up. The most effective learning comes with repetition. I also explained the importance of a structured routine to the parents I worked with, so that they could carry on after I'd left. I cautioned them to always make sure that their baby had some kind of activity after a feed instead of going right to sleep, so that their little one wouldn't associate eating with sleeping. Because "my" babies' lives were so predictable and calm, most of them were good eaters, they learned to play independently for increasingly longer periods, and they could get themselves to sleep without sucking on a bottle or breast or being rocked by their parents. As many of those babies grew into toddlers and preschoolers, I stayed in touch with their parents, who informed me that not only were their children thriving in their daily routines, they were also confident in themselves and trusted that their parents would be there if they needed them. The parents themselves learned early on to tune in to their child's cues by carefully observing their body language and listening to their cries. Because they could "read" their child, they felt better equipped to deal with any bumps in the road.By the time I was ready to write my first book, my coauthor and I came up with "E.A.S.Y.," a simple acronym designed to help parents remember the order of my structured routine. Eat, activity, sleep -- it's the natural course of life -- and then, as a bonus, time for you.Hogg, Tracy is the author of 'Baby Whisperer Solves All Your Problems Sleeping, Feeding, And Behavior--beyond the Basics from Infancy Through Toddlerhood' with ISBN 9780743488945 and ISBN 0743488946.