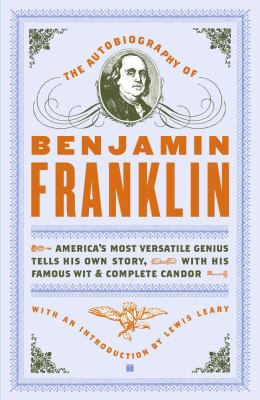 Introduction In any discussion of American origins, Benjamin Franklin is a good man to begin with. Years before the United States existed, he started things that his countrymen continue to be proud of -- libraries, civic clubs, volunteer fire departments, effective street lighting, and efficient heating devices. He was solidly American, ingenious, practical, ambitious, and successful. HisAutobiographytestifies that his feet were firm on the ground, but that he did not stand still. No man of his time went so far, and few of any time have gone farther. But, because he not only started things, but also let it be known that he did, Franklin may sometimes be credited with more than he deserves. That is one reason why he stands confidently at the head of any native literary procession. Talking about himself, he produced his country's best masterpiece.Like Walt Whitman and Mark Twain and Ernest Hemingway, Franklin created a public image so attractive that it obscures the man who made it. Whatever influences of time or place or circumstance combined to produce the successful, whimsical and plain-spoken homespun favorite remembered as Ben Franklin, the projection of this character was a literary exploit of magnitude. "He knew what he was about, this sharp little man," said D. H. Lawrence. "He set up the first dummy American." Certainly Horatio Alger could not have done so well in celebrating the stereotype rise from rags to riches if Franklin had not invented it. It could have bothered neither man that, like almost all of Franklin's devices, the invention was mechanical. This was something never forgotten from his New England boyhood, that everything could be set in a row and counted.When Thomas Carlyle called him the father of all Yankees, he meant something of that sort, and when Leigh Hunt explained that "Americans are Englishmen with the poetry and romance taken out of them," he meant much the same. Carl Van Doren has spoken of Franklin's magnificent centrality and of the flexible equilibrium of his talents, because, too busy or too wise to become any one thing, Franklin managed all things, including himself, with casual efficiency: "Mind and will, talent and art, strength and ease, wit and grace met in him as if nature had been lavish and happy when he was shaped. Nothing seems to have been left out except a passionate desire, as in most men of genius, to be all ruler, all soldier, all saint, all poet, all scholar, all some one gift or merit or success."Perhaps in colonial America more than in most places, versatility was a becoming achievement -- combined with self-control, recognition of limits beyond which, as Hemingway later was to explain, no man could successfully venture. Franklin painstakingly defined himself as a man who kept within bounds, discovering such satisfaction in handling what was set before him that he seldom was tempted to stretch for more. Reality was what he could see or feel, even at the end of a kite string, and he was too sensible to suspect that gods of the sky might smite him down in anger. That was what Melville must have meant when he said that Franklin's mind was grave, but never serious.Rightfully proud of the range of his experience, Franklin was pleased when other people mistook breadth for depth, but he never fooled himself, or let himself down. When something was to be said, he prepared it carefully, so that it could be said well, for Franklin recognized his deficiencies, especially when it came to conversation. He did not extemporize easily. Like Mark Twain, he was best in monologue, skilled at fitting tales to special situations and, if uninterrupted, could spin out a pretty compliment or an effective satire. In temperament a tranquil man, he is not known to have been disturbed by unpleasant dreams, though he had wit enough to invent nighttime fantasies for recitation in flirtatious badinage with appreciative ladies. It did not seem strange toFranklin, Benjamin is the author of 'Autobiography of Benjamin Franklin', published 2003 under ISBN 9780743255066 and ISBN 0743255062.