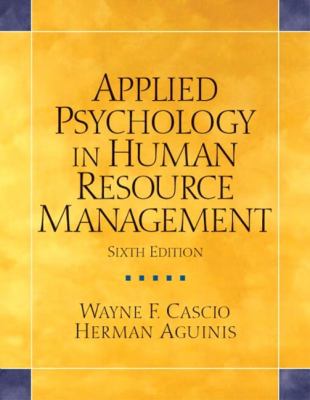 Like its first five editions, this book is an interdisciplinary-oriented, research-based HR text. Perhaps the most significant change in the current edition is the addition of a new coauthor, Herman Aguinis. Herman brings considerable content and methodological expertise, and this edition of the text reflects those strengths. As in the past, our subject matter is personnel psychology--the application of psychological research and theory to human resource management (HRM) in organizations. As an applied area of psychology, personnel psychology seeks to make, organizations more effective and more satisfying as places to work. Personnel psychology represents the overlap between psychology and HRM. It is a subfield within HRM, excluding, for example, such topics as labor law, compensation and benefits, safety, and industrial relations. Personnel psychology is also a subfield with in industrial and organizational (I/O) psychology-the study of the behavior of men and women in work settings. Today, with the tremendous growth of I/O psychology in many directions, HRM is appropriately considered only one of many areas to which I/O psychologists have turned their attention. As in the first five editions, we have included material of a decidedly theoretical, statistical, or psychometric nature. No doubt some readers will criticize the book on these grounds and charge that "things just aren't done that way in the real world." Perhaps not, for we agree that some of the ideas in the book are used by very few organizations. However, many topics in earlier editions that may have seemed "far out" are now considered "mainstream"--for example, validity generalization, statistical power analysis, and situational interviews. The book is designed to be forward-looking and progressive, and, even though some of the material is presented in a conventional manner, with a dose of statistical, psychometric, or psychological theory thrown in, we believe that in the last analysis nothing is more practical. In writing this book, we make two assumptions about our readers: (1) They are familiar with the general problems of HRM or I/O psychology, and (2) they have some background in fundamental statistics--at least enough to understand statistical procedures on a conceptual level, and preferably enough to compute and interpret tests of statistical significance. As in earlier editions, our goals are (1) to challenge the field to advance rather than simply to document past practice, (2) to present a model toward which professionals should aim, and (3) to present scientific procedure and fundamental theory so that the serious student can develop a solid foundation on which to build a broad base of knowledge. Our overall objective is to integrate psychological theory with tools and methods that will enable the student or professional to translate theory into practice effectively. We are well aware that in the complex and dynamic environment in which we live and work, scientific and technological advances are occurring faster than ever before. Hence, education must be a lifelong effort if one is to avoid what Armer (1970) calls the "Paul Principle": Over time, people become uneducated and therefore incompetent to perform at a level at which they once performed adequately. If the book projects this one message, then the HR profession will be enriched immeasurably. The response to the first five editions of this book in psychology departments and in business and professional schools has been particularly gratifying. However, new ideas and research findings in all the areas covered by the book made a sixth edition necessary in order to reflect the state of the art in personnel psychology. We have tried to do just that, as reflected in the fact that more than 500 of the references in this sixth edition are new! Year by year, the field continues to advance rapidly. Here is sample of what is new in the sixth editioCascio, Wayne F. is the author of 'Applied Psychology In Human Resource Management', published 2004 under ISBN 9780131484108 and ISBN 0131484109.