Ancient Records of Egypt The First Through the Seventeenth Dynasties 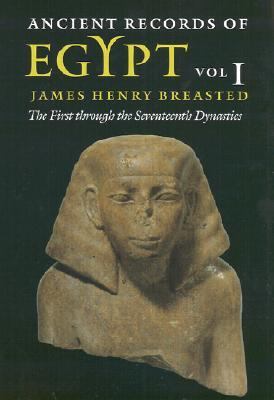 "Around the turn of the last century, James Henry Breasted took on the challenge of assembling all the available historical documents of ancient Egypt and translating them into English. This prodigious undertaking involved traveling to the monuments extant in the Nile valley and in outlying areas of Egyptian conquest, as well as to museums throughout Europe where Egyptian relics were housed. Breasted made his own copies of hundreds of Egyptian records inscribed on papyrus or leather or carved in stone and engaged in a thorough study of the published records of Egyptian history in conjunction with his own transcription of the documents themselves. This five-volume compendium is the result.Breasted's monumental work, originally published from 1906 to 1907, encompasses twenty-six dynasties spanning more than three millennia: from ca. 3050 B.C. to 525 B.C. For each document, Breasted provides information on location, condition, historical significance, and content. Beginning with the earliest known official annals of Egypt, the Palermo Stone, Breasted catalogs the realm's official activities, including royal succession, temple construction, property distribution, and foreign conquest. He tracks the careers of scores of kings, queens, government officials, military leaders, powerful statesmen, and influential courtiers, reproducing their autobiographies, letters of favor, paeans, mortuary gifts, and tomb inscriptions. Clearly annotated for the lay reader, the documents provide copious evidence of trade relations, construction activities, diplomatic envoys, foreign expeditions, and other aspects of a vigorous, highly organized, and centrally controlled society.Breasted's commentary is both rigorously documented and accessible, suffused with a contagious fascination for the events, the personalities, the cultural practices, and the sophistication these records indicate. A herculean assemblage of primary documents, many of which have deteriorated to illegibility in the intervening century, Ancient Records of Egypt illuminates both the incredible complexity of Egyptian society and the almost insuperable difficulties of reconstructing a lost civilization.This first paperback edition of Ancient Records of Egypt features a new introduction and supplementary bibliographies by Peter A. Piccione. Setting Breasted's work in the context of the development of American Egyptology, Piccione discusses Breasted's establishment of the Oriental Institute of the University of Chicago, with corporate support by John D. Rockefeller and other benefactors, and surveys the ambitious body of publications with which Breasted laid the foundation for future Egyptian studies."Breasted, James Henry is the author of 'Ancient Records of Egypt The First Through the Seventeenth Dynasties' with ISBN 9780252069901 and ISBN 0252069900.