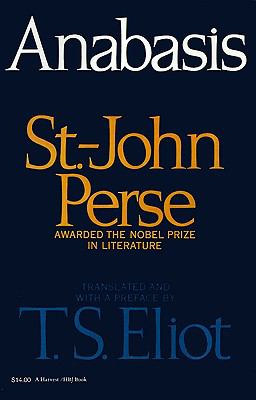 Saint-John Perse (pseudonym of Alexis Léger, also Alexis Saint-Léger Léger) (31 May 1887-20 September 1975) was a French poet and diplomat who was awarded the Nobel Prize for Literature in 1960 "for the soaring flight and evocative imagery of his poetry."Alexis Léger was born in Pointe-à-Pitre, Guadeloupe. His father, a lawyer, had lived in Guadeloupe since 1815. The Léger family was in charge of two family-owned plantations, one of coffee and the other of sugar.In 1897, Hégésippe Légitimus, the first native Guadeloupan elected president of the Guadeloupe General Council took office with a vindictive agenda towards colonists. The Leger family returned to metropolitan France and settled in Pau. The young Alexis felt like an expatriate and spent much of his time playing sports, such as hiking, fencing, horseback riding and sailing.In 1904 he received the baccalaureate with honors and started an academic course in Law at the University of Bordeaux. He frequented cultural clubs where he met Paul Claudel and Odilon Redon. He published a translation of Robinson Crusoe then undertook a translation of Pindar. He interrupted his studies in 1907 because of his family's difficult financial situation at the death of his father. He did, however, receive his degree in 1910, the same year he published Eloges.He was recruited to serve in the Foreign Office in 1911 and spent his first years in office travelling to Spain, Germany and the United Kingdom. When World War I broke, he held the position of press corps attaché for the government. From 1916 to 1921, he held the post of secretary at the French Embassy in Peking. There, he received his first exposure to political affairs. In 1921 in Washington, while taking part in a conference on disarmament, he was noticed by Aristide Briand, the then-Prime Minister of France, who recruited him as his assistant. In Paris, he frequented the literary circles of André Gide and Paul Valéry, as well as the musical circles of Igor Stravinsky, Nadia Boulanger and les Six.In 1924 he published Anabase, using the pseudonym of Saint-John Perse for the first time. After the death of Briand in 1932, he held successive important positions within the Foreign Office. From 1933 to 1940, despite great instability in the government, he remained general secretary of the Foreign Office. At the Conference of Munich in 1938 he opposed in vain the cession of Czechoslovakia to Germany. He was discharged from his post in 1940 and left France for the United States.The Vichy government dismissed him from the Légion d'Honneur order and from French citizenship. He spent some time in financial difficulties until Archibald MacLeish, Director of the Library of Congress and himself a poet, offered him a position. Lilita Abreu joined him in Washington DC. He declined a teaching position at Harvard University, preferring to focus on his writing.He remained in America long after the war ended, traveling extensively. In 1957, he was offered a villa in Provence and from that time on, he shared his time between France and the United States. In 1958, he married Dorothy Milburn Russell, a wealthy American.In 1960, he was awarded the Nobel Prize in Literature. He died in his villa in Provence and was buried in Giens.Perse, Saint-John is the author of 'Anabasis' with ISBN 9780156074063 and ISBN 0156074060.