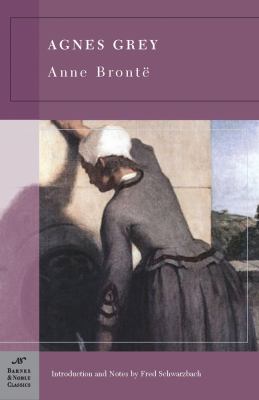 From Fred Schwarzbach's Introduction toAgnes Grey It is impossible for any of us to approach the Brontes without calling up the Bronte myth. We are all familiar with its outlines. The isolated family house on the edge of a bleak Yorkshire moor. The four young children, Charlotte, Branwell, Emily, and Anne, their mother and elder sisters all dead, now in the care of a stern Calvinist aunt. The Reverend Patrick Bronte, a failed writer himself, reclusive, brooding, and subject to periods of dark rage. Then, through the agency of a present of toy soldiers, the children begin writing sagas in which the soldiers come to life. All four are gifted, though Branwell drinks himself to an early death, while the three young women precociously develop writing careersEmily dying young of the family curse of tuberculosis, and Charlotte living longer, only to die shortly after her marriage. Anne, the youngest, is also the quietest and least talented; modest, religious, and industrious, she too dies of TB at an early age. The narrative, like any myth, partakes of some truths but embodies a great deal of fantasyand a great deal of that linked to the famous Wyler-Olivier-Oberon film ofWuthering Heights(1939). To begin: The parsonage was at the edge of a large, bustling mill town; the aunt appears to have been loving and kind and an evangelical Methodist, a far cry from Calvinism; Patrick Bronte was actively engaged in the affairs of the parish and the community, and clearly much concerned with the education and welfare of his children; and so on. But the myth is probably most unfair in its relegation of Anne Bronte to a bit player in the family dramain fact, she was, though the youngest, probably the most precocious of them all as a writer, producing two novels and a substantial body of poems by the time she died at twenty-nine. Anne's relegation to a minor role within the family happened not long after her death. Her second novel,The Tenant of Wildfell Hallthe story of a wife who abandons her husband to live under an assumed name and who commits the even greater moral crime of falling in love with another man while her husband liveswas nothing short of scandalous in its subject matter. By contemporary standards, no young woman could write about immoral acts without either knowing of them firsthand or by being tainted by having imagined themin either case, her reputation was tarnished beyond repair. After Anne died, Charlotte tried to defend her sister against charges of moral impropriety by controlling the public representation of Anne's character (and, similarly, that of Emily, whose reputation suffered from her authorship ofWuthering Heights), and it was she who began constructing the image of a quiet, passive, deeply religious (and by implication not as talented) Anne. Deeply religious she was, but far from quiet and passiveandshe was very talented. A useful starting point will be the facts of her life, which shed some considerable light on her character and her interests. The circumstances of the family are somewhat exceptional: Anne's father was very much a self-made man, even making of his humble Irish surname (Prunty or Brunty) the rather more impressive, aristocratic, and vaguely French-sounding Bronte. The son of a farmer, and at first a blacksmith's assistant, he was by age seventeen a village schoolmaster, but in 1802 his prospects changed dramatically when he managed to secure a scholarship to St. Johns College, Cambridge, where he prepared for a clerical career. He rose through the ranks of the church, acquiring along the way, in 1812, a respectable and mature wife, Maria Branwell. By 1820 they were settled in Haworth, where Reverend Bronte was perpetual curate (that is, he held the oBrontë, Anne is the author of 'Agnes Grey Easyread Large Edition', published 2005 under ISBN 9781593083236 and ISBN 1593083238.