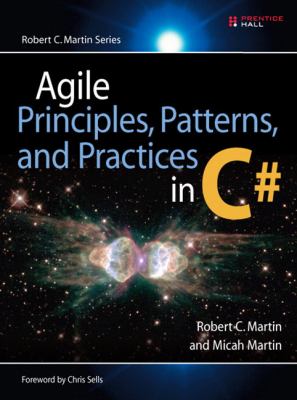 But Bob, you said you'd be done with the booklastyear. Claudia Frers, UML World, 1999 Bob's Introduction It's been seven years since Claudia's justifiable complaint, but I think I have made up for it. Publishing three booksone book every other year while running a consulting company and doing a lot of coding, training, mentoring, speaking, and writing articles, columns, and blogsnot to mention raising a family and enjoying a grandfamily can be quite a challenge. But I love it. Agile development is the ability to develop software quickly, in the face of rapidly changing requirements. In order to achieve this agility, we need to use practices that provide the necessary discipline and feedback. We need to employ design principles that keep our software flexible and maintainable, and we need to know the design patterns that have been shown to balance those principles for specific problems. This book is an attempt to knit all three of these concepts together into a functioning whole. This book describes those principles, patterns, and practices and then demonstrates how they are applied by walking through dozens of different case studies. More important, the case studies are not presented as complete works. Rather, they are designsin progress.You will see the designers make mistakes and observe how they identify them as mistakes and eventually correct them. You will see the designers puzzle over conundrums and worry over ambiguities and trade-offs. You will see theactof design. Micah's Introduction In early 2005, I was on a small development team that began work on a .NET application to be written in C#. Using agile development practices was mandatory, which is one of the reasons I was involved. Although I had used C# before, most of my programming experience was in Java and C++. I didn't think that working in .NET would make much difference; in the end it didn't. Two months into the project, we made our first release. It was a partial release containing only a fraction of all the intended features, but it was enough to be usable. And use it they did. After only two months, the organization was reaping the benefits of our development. Management was so thrilled that it asked to hire more people so we could start more projects. Having participated in the agile community for years, I knew a good many agile developers who could help us. I called them all and asked them to join us. Not one of my agile colleagues ended up joining our team. Why not? Perhaps the most overwhelming reason was the fact that we were developing in .NET. Almost all agile developers have a background in Java, C++, or Smalltalk. But agile .NET programmers are almost unheard of. Perhaps my friends didn't take me seriously when I said we were doing agile software development with .NET, or maybe they were avoiding association with .NET. This was a significant problem. It was not the first evidence I'd seen of this problem, either. Teaching week-long courses on various software topics allows me to meet a wide cross-section of developers from around the world. Many of the students I've instructed were .NET programmers, and many were Java or C++ programmers. There's no gentle way to put this: In my experience, .NET programmers are often weaker than Java and C++ programmers. Obviously, this is not always the case. However, after observing it over and over in my classes, I can come to no other conclusion: .NET programmers tend to be weaker in agile software practices, design patterns, design principles, and so on. Often in my classes, the .NET programmers had never heard of these fundamental concepts.This has to change. The first edition of this book,Agile Software Development: Principles, Patterns, aMicah Martin is the author of 'Agile Principles, Patterns, and Practices in C#', published 2006 under ISBN 9780131857254 and ISBN 0131857258.