Agenda What Every Business Must Do to Dominate the Decade 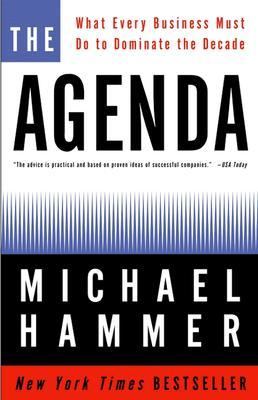 1 Get Serious About Business Again Welcome to the Customer Economy Suddenly, business is not so easy anymore. For a very brief period in the late 1990s, it seemed that all the problems of business had been solved. Everywhere one turned, enterprises were booming. Established companies were racking up record sales and earnings. Start-ups were deluged with capital. Everyone was doing well, and everyone was making money. Growth and success were taken for granted. Confidence was high. Customers were spending. The stock market was moving in one direction only--up. Anyone seemed to be able to win at business. Knowledge, technique, and experience were not needed, only energy, gumption, and attitude. The new American dream had nothing to do with working hard and long to build a business but featured instead hanging out with some buddies, coming up with a cool idea, and "going public" in a year or so. The business zeitgeist, as promoted by self-proclaimed visionaries, was that we were in a "New Economy," in which the business cycle had become a thing of the past. The Internet had changed everything, and mundane issues like cost and quality and inventory had become irrelevant. Not anymore. The longest economic expansion in U.S. history is winding down, and the giddy days of the 1990s are now mere memories. As of this writing, the business media are no longer reporting on plants running over capacity, on companies scrambling to fill positions, or on venture-funded start-ups revolutionizing this industry or that. Instead, we are hearing about layoffs and store closings, energy shortages and soaring costs, decreased advertising and lower profits, missed earnings expectations and steep stock market declines. Business school applications are up, and IPOs are down. Businesspeople's smugness has given way to anxiety. They can no longer take growth for granted or assume that this year will be better than last. Now they must worry whether customers will buy, costs will rise, or competitors will overtake them. They lie awake wondering if the fundamental premises of their businesses will remain valid. They are shocked to find that markets go down as well as up and that growth has to be created, not just harvested. Managers are learning again that most new ideas do not succeed, that many companies fail, that resources are always scarce, and that above all, business is not a game for amateurs. Managers are rediscovering that business is about execution. It is not about having the right "business model" or capturing eyeballs, about creating a really cool work space or planning a launch party. Suddenly bereft of inflated stock market evaluations--a cushion that on the one hand allowed companies to make acquisitions for free and to pay their people with options instead of money, and that on the other made customers feel rich and free-spending--businesspeople are back to watching every penny. They have been reminded that it's not enough to get the order, you have to fill it; that having an idea for a product does you no good if you can't develop it; and that even Wall Street analysts will be fooled by a hot concept only for so long. Business today is no longer about grand visions and the arrogance of youth. The time is past for frivolous notions and flights of fancy. Business today is about nuts and bolts, the mechanics of making companies work. It is serious stuff. Even if the current downturn proves to be brief, even if fiscal and monetary policymakers pull more rabbits out of their hats, there will be no return to the state of innocence of the 1990s. Just as a generation of investors was permanently scarred by the Great Depression, a generation of managers has been transformed by the collapse of the bubble of the late 1990s. They have become modest and serious, fearful of their environment and uncertain about their futures. This is as it shHammer, Michael is the author of 'Agenda What Every Business Must Do to Dominate the Decade' with ISBN 9781400047734 and ISBN 1400047730.