After the Dance A Walk Through Carnival in Jacmel, Haiti 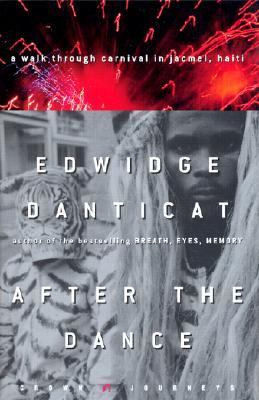 I took advantage of the break to edge my way into the crowd. The carnival bands had completely taken over every meter of the square. As had previously been announced, the most renowned ones from the South East were there. The musicians and dancers seemed to be camped out for the moment amidst their sleeping instruments: different types of drums, bamboo horns, conch shells, rattles, saxophones, flutes, cones, accordions. Here and there, under the trees, while eating and drinking, the Jacmelians began to tell stories. Rene Depestre, Hadriana dans tous mes reves Jacmel 2001 "Carnival Country" During carnival Jacmel is not a town or a city. It is a country," Michelet Divers, Jacmel's best-known carnival expert, tells me over a tall glass of lemonade on the airy terrace of the Hotel de la Place, a three-story, white Victorian-style restaurant, bar, souvenir shop, and hotel in the Bel-Air section of Jacmel. The terrace has an eye-level view of a flamboyant-filled piazza, where young men straddle the low colonnaded walls to watch the bustling human and automobile traffic stream by. I am here for my first national carnival. Since 1992, Divers explains, Jacmel has been hosting two carnivals on consecutive weekends, the national one, which draws people from all over Haiti and the Haitian diaspora, and the local one, which is primarily attended by the residents of Jacmel. Everyone I have spoken to about my intention to attend the national carnival festivities this coming Sunday has recommended that I first speak to Divers. A stocky forty-seven-year-old with dark, wide-rimmed glasses, Divers is a radio commentator and former school principal. He is quick to point out that he is not the one who came up with the idea of temporary sovereignty for Jacmel, but that other Jacmelians would like to see the image of the southern coastal town of ten thousand, the Riviera of Haiti, the Ibiza of the Caribbean--as the Haitian tourist guides say--detached from the one that outsiders have of the rest of the country, particularly the capital, Port-au-Prince: dirt-poor, politically troubled, and certainly lacking any celebrations. "Jacmel is not like that," says Divers, "especially during carnival." A Jacmelian "by birth and choice," Divers has written a book about the Jacmel carnivals (Le Carnaval Jacmelien) and this year is the cultural adviser for both. This means that he, along with other members of the carnival committee, gets to decide which musical bands, costumed groups, individuals, and animals will be allotted a coveted spot in Sunday's colorful street parade. I do not mention it to Divers, but this is the first time that I will be an active reveler at carnival in Haiti. I am worried that such an admission would appear strange to someone for whom carnival is one of life's passions. A Haitian writer (me)--even one who'd left the country twenty years before, at age twelve--who has never been to carnival in her own country? I imagine him asking. What was that about? As a child living in Haiti with my Baptist minister uncle and his wife, while my parents settled in as new immigrants in New York City, I had never been allowed to "join the carnival," as the Haitian-American rapper Wyclef Jean urged many to do in his 1997 Carnival album. I was too young (under twelve), small for my age, and we lived in one of the poorest neighborhoods in the capital, coincidentally--and in much contrast to this area of Jacmel--also called Bel-Air. Long pre-Lent days of unbridled dancing, with clammy bodies pressed either against each other or within a few inches of the giant wheels of flatbed trucks serving as floats, were considered not safe for me. However, since I had as intense a desire to join the carnival as some peculiar American children have of joining the circus, my uncle for years spun frightening tales around it to keep me aDanticat, Edwidge is the author of 'After the Dance A Walk Through Carnival in Jacmel, Haiti', published 2002 under ISBN 9780609609088 and ISBN 0609609084.