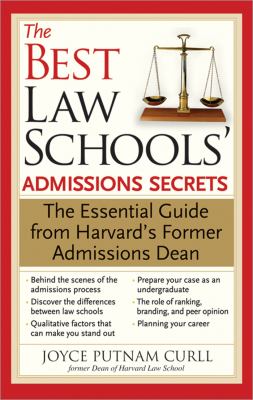 Excerpt from the Introduction HAVING SPENT THE LAST eighteen years of a thirty-four-year career in law school admissions as Dean of Admissions at Harvard Law School (HLS), I have considered for admission more than 120,000 HLS applicants, of whom about 10,000 applicants attended and graduated from HLS. More than 30 percent of the living alumni of the JD program at HLS were admitted on my watch. Before coming to Harvard, during sixteen years at NYU Law School, I considered another 100,000 applicants, of whom 6,000 became NYU Law graduates. Throughout, I have had a wonderful window on society and particularly the world of current and recent college graduates, many of whom already had significant accomplishments under their belts and most of whom showed great promise for the future. And I have watched as those futures unfolded. Some students have flourished throughout law school and their careers. Some stumbled a bit before finding their feet; some enjoyed the law school experience, but not the practice; some hated law school, but loved the practice. I have observed the whole range of possibility with respect to the experience of legal education and the profession. Many roads lead to law school, some direct and others circuitous. I have seen everything from the precocious eighteen-year-old college graduate and the twenty-two-year-old medical doctor who wanted to get a head start on the legal profession, to those who wanted to build on established, successful careers, like the fifty-something-year-old physician, the forty-something screenwriter who became president of the student body, and the forty-something engineer who became president of the Harvard Law Review. You may be one of the many undergraduates who, seeking a livelihood after graduation, have been exploring the professions and, not liking the sight of blood and not having a knack for organic chemistry, have decided that practicing law would be an appealing way to earn a living. Perhaps you are one of those who tried investment banking or consulting and decided that law will get you where you want to be in a more intellectually stimulating and fulfilling manner. You may have been engaged in work that you enjoy, but see the value of a legal education as a stepping-stone to a more responsible position in the field in which you have been working. If you are any of these, or are coming to a consideration of law as a career from another perspective, you are not alone in having some idea of what is involved, but still having questions about whether law school and the legal profession are right for you. You may be wondering how to proceed. You are in good company. Even the strongest, most savvy applicants experience some uncertainty and more than a little trepidation as they set out. I have had ample opportunity to hear from many for whom the admissions process and legal education worked out the best. Most have told me that they wish they had had more understanding as they set out to apply: beginning with decisions about what to study in college, how to prepare for taking the LSAT, how to decide when and where to apply, and finally, where to attend once admissions offers were tendered. Some of the more privileged applicants have access to experienced prelaw advisers and to friends who have navigated the process successfully, and even these still have questions. For those without this guidance, the admissions process can be daunting. More than thirty years ago, I co-founded a group of admissions deans who designed a short panel discussion to impart our collective wisdom about the law school admissions process to prelaw students at our big feeder schools, and to gain insight into the applicant mind-set. Our panel discussion was designed to address misconceptions held by many potential applicants and missteps we collectively observed in the applications we considered. We addressed frequently asked questions in a coherent andCurll, Joyce is the author of 'Admissions Secrets of the Best Law Schools', published 2008 under ISBN 9781402211829 and ISBN 1402211821.