A Pocket Mirror for Heroes 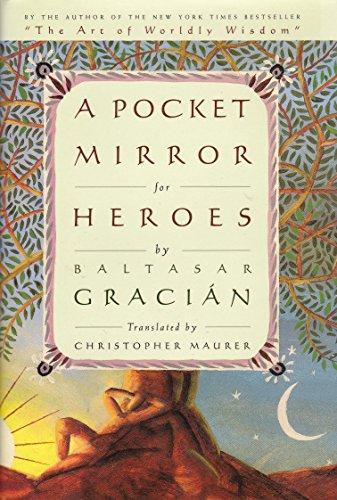 TO THE READER How singular I want you to be! With a book that is a dwarf I want to make a Giant. In the shortest of sayings set down immortal deeds. I will try to make you the Greatest person possible, a miracle of perfection, a king, if not by birth, by deeds. Seneca formed a prudent person. Aesop a shrewd one. Homer a warrior. Aristotle a philosopher. Tacitus a statesman. And Castiglione a courtier. Copying some of the choicest parts of these Great Masters I intend to sketch out a hero, a universal prodigy. That is why I made this pocket mirror from the glass of others and my own fragile nature. At times it will delight you, at others counsel and instruct. In it you will recognize the person you are or the one you ought to be. You will find here a book neither of statecraft nor of economics but a politics for Governing yourself, a compass for sailing toward excellence, an art for reaching distinction with just a few rules of discretion. I write in brief because your understanding is large. My words are as short as the subject is long. But let me not detain you: go forward. BORN TO RULE This chapter covers a gift so subtle it would vanish into thin air were it not held fast by attentive curiosity. In some people there shines an innate sense of leadership, a secret source of dominion that sparks obedience in others without need for orders and without the art of persuasion. When Caesar was the captive of the island pirates, he was most their master. Conquered, he commanded; conquerors, they obeyed. He was captive only in ceremony, and master in the reality of his leadership. People like these do more with a single stern look than others with all their diligence. Their words have a secret vigor, and they achieve more by sympathy than by daylight. The proudest minds and freest judgments bow to them without knowing why. They are almost lions among people, sharing the lion's most important trait: dominion. The lion is recognized by all the other animals with a kind of natural prescience without ever testing his bravery, they foresee and flatter it. Thus it is with these heroes, kings by nature, others advance them respect without asking for the collateral of talent. This gift deserves a crown; if you also have understanding and a great heart, you lack nothing to become a political prime mover. This lordly gift was enthroned in the Duke of Alba, a lord more by nature than by favor. He was great, and was born to be greater, and even his speech revealed this natural sense of command. This quality is far from false gravity, from an affected tone of voice-- the quintessence of what is abominable, though much less odious if it is natural. It is further still from self-doubt, and the outright questioning of one's own worth, which is an open invitation to scorn. It was a teaching of Cato, a sign of his severity, that we should respect, and even fear, ourselves. Lose fear of yourself, grow too familiar, and you give license to others to do the same. MORAL ANATOMY The divine philosopher was right to compare the human body to a resonant, living instrument. When it is well tuned, it makes marvelous music; and when it is not, it is all confusion and dissonance. It is composed of many, many very different strings, incredibly hard to adjust to one another, and its pegs are always slipping. Some have called the tongue hardest to tune, and some the covetous hand. One person says the eyes, which neveBaltasar Gracian is the author of 'A Pocket Mirror for Heroes', published 1995 under ISBN 9780385480215 and ISBN 0385480210.