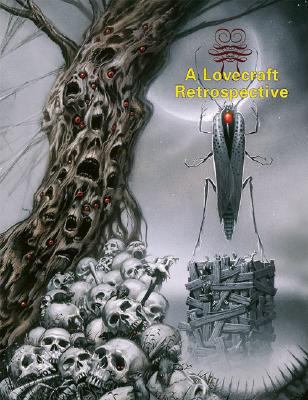 "This full-color retrospective offers a comprehensive gallery of terrifying artistic images inspired by the works of H.P. Lovecraft, now widely considered to be the 20th century's premier writer of horror and weird fiction. Like a good many neglected important writers scribbling before him, Lovecraft himself also toiled in relative obscurity, the bulk of his stories first appearing in pulp magazines like Weird Tales, Amazing Stories, and Astounding Stories. However, in 1939, two years after Lovecraft's death, August Derleth and Donald Wandrei, founders of Arkham House - determined to preserve both his name and works - published The Outsider and Others, the first significant collection of HPL's most representative writings. During the seventy years that followed, Lovecraft's reputation grew steadily, his fiction widely reprinted in both paperback and hardcovers, here and abroad. Most recently, he received even greater recognition when the prestigious Library of America, in 2005, added a selection of HPL's best stories to its illustrious line of classic American authors." "From the beginning, Lovecraft's tales have inspired the most gifted fantasy and science fiction artists, even though he tended to concoct story horrors virtually next to impossible to depict visually. A challenge few serious fantasy artists have ever been able to resist, their number now legion - and growing. In this massive volume you will find the very best of them. Not only Virgil Finlay, Hannes Bok and Lee Brown Coye, but many of more recent date such as Frank Frazetta, H.R. Giger, Michael Whelan, Rowena Morrill and a host of others, all striving to capture the essence of such bizarre creatures as the half-human, half-hideous Dunwich Horror, the winged, star-headed Old Ones, and the colossal Green spawn of the stars himself, the great Cthulhu. Not to mention, the lair of the Rats in the Walls, the mighty Mountains of Madness, and, of course, the fantastic DreamWorld of Unknown Kadath." "From early Weird Tales art by Lee Brown Coye and Virgil Finlay, Lovecraft's personal favorite, to classic examples of 21st century renderings by modern masters like J.K. Potter and John Picacio, this volume's more than 400 pages comprise the best artwork inspired by the Rhode Island icon of horror. Fittingly, Harlan Ellison has provided a heart-felt introduction offering insight into Lovecraft the man and his inspiration for almost a century of artists, both obscure and famous."--BOOK JACKET.Ellison, Harlan is the author of 'A Lovecraft Retrospective: Artists Inspired by H. P. Lovecraft', published 2008 under ISBN 9781933618340 and ISBN 1933618345.