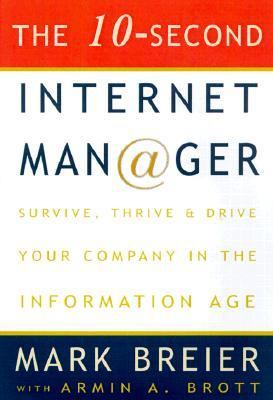 I do everything fast. I think fast. I talk fast. I play fast. I make decisions fast. I always have. Then I came to work in and run an Internet company, the fastest -- and fastest-changing -- thing around. That meant I had to hire fast, buy companies fast, change strategies fast, put out fires fast, and push people to do things they never thought they could -- and to do them faster than they ever could have dreamed. When I was first out of college, I remember picking up a book called The One Minute Manager. I liked it a lot. I was running my own business, a party- and event-planning company called Amazing Events. We did things like arrange for a chorus of tap-dancing pickles to greet the U.S.S. Coral Sea, courtesy of the admiral's wife. Or, as a corporate party gag, chip a golf ball into a board meeting, then send a golfer, a caddy, a television announcer, and a course marshal in after it. But back to The One Minute Manager. I was really impressed with the book's simple, commonsense approach (and given its enduring sales record, I'm clearly not alone). Over the years I've recommended the book to lots of people. But recently I was telling a colleague about it when I suddenly realized I'd completely forgotten the details of the book's message. I could still remember the main points: that managers can and should act quickly and at the same time value their people. But the subtleties had faded from my memory. I decided to reread the book. I ordered a copy and enjoyed a pleasant surge of nostalgia as I held the familiar, compact volume in my hand. But within minutes of starting to read, I found myself getting incredibly impatient at the author's leisurely stroll through the book's key points. Frustrated, I put the book down. Working in the Internet world had so completely rewired my mind that I'd actually believed The One Minute Manager was a book I could read in one minute. The problem, I realized, is that the way things are going these days, it's hard for me to find a free minute. Internet companies expand at a mind-boggling pace. They're full of super-motivated people who generate three times as many ideas as any company could possibly handle. Internet customers demand more and better and faster every single day, and companies are trying to build and maintain a technology war chest in a world where technology is a moving target, evolving every day. I also didn't have a free minute because I would get dozens of calls, e-mails, letters, and requests every hour: old friends would see me interviewed on television and want to get together; there were invitations to attend Internet conferences and trade association meetings; businessmen from China were coming through town and top media executives supposedly wanted to thank me for advertising on their networks but really just wanted to pick my brain about what is all this Internet stuff anyway? I would get a half-dozen calls a month from someone who wanted to buy us or wanted us to buy them, and it would be impolite of me not to speak with CEOs running Fortune 500-size companies who were gnashing their molars into powder over Internet stock market valuations. And then, of course, there were the reporters, politicians, nonprofit groups, and business school students who wanted to set up interviews. Sometimes they wanted juicy insights about Amazon.com, where I used to be vice president of marketing. Sometimes they wanted feedback on the deal du jour making the headlines that had to do with Internet stocks or software wars. But the majority of the time they would want to know: What's the secret of being an Internet CEO? What's the Internet going to look like in six months? How can they get a copy of the secret to-do list that will enable them to finally jump off the Old Economy steamer and kick up some spray in an I-way speedboat? In short, they wanted to know where they can get some magic dust. You know, the stuff you add water to, stir, and -- poBreier, Mark is the author of '10-Second Internet Manager: Survive, Thrive, and Drive Your Company in the Information Age - Mark Breier - Hardcover - 1 ED' with ISBN 9780609607329 and ISBN 0609607324.

4 from $0.30
Loading marketplace prices 4 copies from $0.30 How does the rental process work?
View more